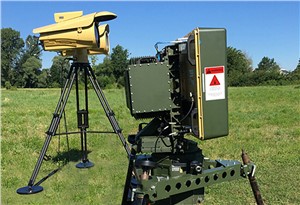 HENSOLDT is supplying three Spexer2000 3D radars and one Z:NightOwl M camera as Xpeller module packages as part of the GUARDION overall system of ESG Elektroniksystem- und Logistik-GmbH and its partners for a total of five drone defence systems. They are used as part of container-based drone defence systems to protect so-called forward operating bases of the German Armed Forces in their operational areas.

“We are herewith supporting the Bundeswehr in close cooperation and coordination with ESG as prime contractor and system integrator”, explains Markus Wolf, Head of Sales and Business Development at HENSOLDT Ventures. “Our high-performance sensors complement the ESG GUARDION system perfectly to achieve the required performance spectrum. The Spexer2000 3D radar is characterized by outstanding detection capabilities, especially against asymmetric threats. The Z:NightOwl M camera was specially developed for high ranges. With it, we support drone defence against so-called Class I drones, that is, unmanned aircraft weighing up to 25 kg.”

HENSOLDT has already demonstrated its extensive experience in drone defence with its Xpeller counter-UAV system on several occasions. In addition to permanent deployment, customers also use the system for temporary protection of major events, most recently for instance during the Dutch Day of Remembrance in Amsterdam in May 2020. Xpeller distinguishes itself particularly through its modularity and scalability. The system can thus be tailored precisely to customer requirements.