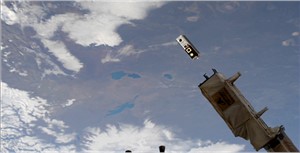 DeMi made first contact about a week following launch, demonstrating the expected power from its solar arrays, as well as correct spacecraft pointing and stable temperatures. The team will focus on payload checkout over the coming days.

Deformable mirrors can adjust the shape of their reflective surfaces to correct for the effects of temperature and mechanical changes on a space telescope, improving image quality. The experiment will measure how well a MEMS deformable mirror performs in space, from the rocket launch through its time in orbit experiencing the thermal and radiation environment.

“Space telescopes currently in orbit are limited in ability to detect and distinguish small, dim objects next to large, bright objects – for example, dim exoplanets next to bright stars. Deformable mirrors have proven successful in ground-based applications, but their performance has not been tested in long duration space operations,” said Stacie Williams, the program manager for DeMi in DARPA’s Tactical Technology Office. “Our goal is to demonstrate the benefits of a MEMS deformable mirror to actively correct the images of distant objects in space.”

DeMi also aims to demonstrate wavefront correction, where the payload measures the wavefront, or shape of misalignments in the optical system. The deformable mirror corrects these errors by changing shape, acting like the opposite of a distorting funhouse mirror. After making observations, the DeMi spacecraft will downlink images from the wavefront sensors so operators can monitor the deformable mirror behavior from the ground.

The DARPA DeMi team includes Aurora Flight Sciences; Massachusetts Institute of Technology, which designed and built the optical payload; and Blue Canyon Technologies, which designed and built the spacecraft bus. DeMi arrived to the space station in February aboard a cargo resupply mission, packed into a NanoRacks CubeSat Deployer. The mission is anticipated to last about a year.