Parts Come Together This Year for DARPAs Robotic In-Space Mechanic 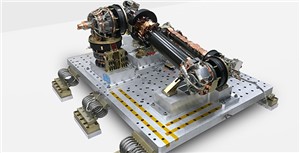 Eyeing a launch in 2023, DARPA’s Robotic Servicing of Geosynchronous Satellites (RSGS) program will focus the remainder of this year on completing the elements of the robotic payload. The objective of RSGS is to create an operational dexterous robotic capability to repair satellites in geosynchronous Earth orbit (GEO), extending satellite life spans, enhancing resilience, and improving reliability for the current U.S. space infrastructure.

Earlier this year, DARPA partnered with Space Logistics LLC, a wholly owned subsidiary of Northrop Grumman, to provide the spacecraft bus, launch, and operations of the integrated spacecraft. DARPA will provide the payload that flies on the bus, including the robotic arms, through an agreement with the U.S. Naval Research Laboratory (NRL).

In 2021, NRL will integrate the robotic arms onto the payload structure, and then is expected to begin environmental tests by the end of same year. After launch in 2023, it will take approximately nine months to reach GEO, and the program anticipates servicing satellites in mid-2024.

A Global and Regional Analysis: Focus on Applications, Products, and Country-Wise Assessment

With in-space robotic servicing, a variety of repairs or adjustments become possible, from “rescuing” a new spacecraft to adding sensors to upgrade an aging, but still operational satellite. The first step is to examine the spacecraft up close.

“Close-up examination sounds simple, but it’s currently not possible in GEO,” said Joseph Parrish, program manager for RSGS in DARPA’s Tactical Technology Office. “First, the RSGS spacecraft will fly around the client spacecraft to observe from a distance. Then, the RSGS spacecraft will grapple the client spacecraft to examine it at a centimeter scale. We may need to free a stuck solar array to allow a spacecraft to reach its full potential. Or we could add new sensor payloads, such as a space weather detector. The addition of a ‘jet pack’ propulsion capability could essentially extend the spacecraft mission without the complicated operation of transferring propellant to unprepared spacecraft that were launched more than a decade ago. With persistent robotic servicing now becoming available, future spacecraft will be prepared for refueling and eliminate the need for the jet pack."

The robotic servicer is designed to execute a series of scripted operations with humans in the loop throughout the process. The grappling sequence is fully autonomous because it moves too quickly for a human to control given the space-to-ground communications delay.

DARPA’s primary objective is establishing an on-orbit servicing industry that benefits both government and commercial clients. DARPA’s agreement with Space Logistics aims to transition the dexterous robotic capability from DARPA to industry, and includes servicing government satellites for a set price. Parrish notes that about a quarter of the satellite assets in GEO are government-owned. The remainder are commercial satellites that could become a base for commercial in-space robotic servicing business.

“The premise of RSGS is that DARPA will help propel the technology from demonstration to operational capability,” Parrish said. “Over the past 25 years, the in-space robotics community has largely retired the technology risk. Some previous demonstrations brought along clients for mock in-space operations. RSGS is different because the intention is to remain in orbit over the long term and solve real problems on existing spacecraft.”

Tell a friend:
Parts Come Together This Year for DARPAs Robotic In-Space Mechanic