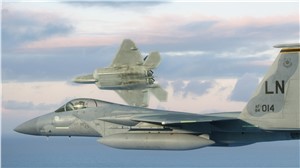 By making it a collaborative effort, the Air Force leverages investments already made by the Navy to deliver a significant leap in training capabilities sooner and at less cost. The Air Force will call this the P6 Combat Training System (P6CTS), which will significantly improve training realism in simulated, highly-contested combat environments and allow pilots to ‘train as they fight’.

“This capability can’t be overstated. The TCTS Inc. II and P6CTS programs will enable joint tactics, techniques and procedures in a secure environment against a peer adversary threat, unlike anything the services have been able to do in the past. We're excited about the potential," said Heather Robertson, vice president and general manager, Integrated Solutions for Collins Aerospace.

Collins Aerospace recently announced the completion of the first pre-production TCTS Inc. II training pod, a key component of the solution that provides connectivity to and from the aircraft for data and weapons activity during training exercises. This pre-production maturity will enable early Air Force fielding of P6CTS to all 55 training ranges.