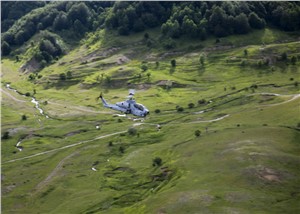 The exercise was planned alongside Albanian allied forces and consisted of aviation ordnance-delivery training aimed at increasing readiness and reinforcing the partnership between the U.S. and Albania.

“The BATARG and 26th MEU are excited about the opportunity to build on the live-fire exercise conducted by the U.S. Navy’s Helicopter Sea Combat Squadron 28, Det. 1, with our Albanian partners less than two months ago,” said Capt. Lance Lesher, commodore of Amphibious Squadron 8. “This important training, this time with 26th MEU aircraft, continues to reinforce familiarity and interoperability with our Albanian partners, reaffirming our commitment to not only this enduring relationship, but security and stability across the region. This valuable ARGMEU training ensures that along with the Albanian military, we maintain peak mission readiness in any environment, including the challenges associated with combat operations during a pandemic.”

Venoms and Super Cobras, commonly referred to as H-1’s, are essential to sea-based air power and air superiority. H-1s, when coupled together, have the ability to provide close-air support, casualty evacuation from remote or austere locations, and transport Marines and Sailors from ship to shore – all from over the horizon.

“This training evolution was a great opportunity for our H-1 crews to integrate with a NATO ally through extensive coordination and combined planning, all while physically distributed from our Albanian counterparts aboard our sea-based platform,” said Capt. Casey Low, an AH-1W Super Cobra pilot. “The evolution tested and demonstrated our ability to project power ashore utilizing air-delivered fires from the MEU’s Aviation Combat Element to support combined NATO forces.”

By utilizing the overland ranges in Albania, UH-1Y Venom and AH-1W Super Cobra pilots assigned to the 26th MEU were able to become more proficient in conducting live-fire tactical maneuvering in a challenging, mountainous environment.

“As a sea-based Marine Air-Ground Task Force (MAGTF), we are able to bring combat power ashore utilizing assets from our Aviation Combat Element – to include UH-1Y Venoms and AH-1W Super Cobras,” said Col. Trevor Hall, commanding officer of the 26th MEU. “We are grateful for this opportunity to conduct live-fire training in Albania and demonstrate this unique capability. Being able to train in a NATO-allied country improves overall coordination with our allies and partners in the region, which ultimately ensures a free and peaceful Europe.”

ARGMEUs operate continuously across the globe and provide the geographic combatant commanders with a forward-deployed, flexible and responsive sea-based MAGTF. The blue-green team is fully capable of conducting operations across a full spectrum of conventional, unconventional and hybrid warfare. Training such as this strengthens the execution of mission-essential tasks alongside NATO allies.

Bataan ARG and 26th MEU consist of more than 4,000 total Sailors and Marines, who are operating in the U.S. 6th Fleet area of operations in support of U.S. national security interests in Europe.

U.S. 6th Fleet, headquartered in Naples, Italy, conducts the full spectrum of joint and naval operations, often in concert with allied and interagency partners, in order to advance U.S. national interests and security and stability in Europe and Africa.