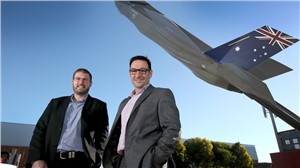 Axiom already supports BAE Systems with component machining for the Joint Strike Fighter, the world’s largest defence program. This new contract will take the value of Axiom’s work to more than $3 million a year.

The company machines seven parts in each vertical tail set produced by BAE Systems at its Edinburgh Park facilities north of Adelaide. Since starting on the program in 2015, Axiom has continued to expand its machining capabilities and won the new work after a six month trial during 2019/2020.

The new work involves machining one of the most complex parts for the F-35 vertical tail - the Leading Edge Spar which at just under three metres is the longest titanium component in the aircraft’s vertical tail. The machining work awarded to Axiom was previously undertaken in the UK.

Across its global enterprise, BAE Systems has a significant role in the advanced manufacture of F-35 aircraft. In Australia, the team produces bespoke components, which are supplied to BAE Systems in the UK which builds the aft fuselage and empennage, as well as to Victorian manufacturer Marand which consolidates components in the vertical tail.

Production of vertical tail parts at Edinburgh Parks began in 2008 and will continue for another decade.

BAE Systems Australia Managing Director Defence Delivery Andrew Gresham said:
“From the very start, Axiom has worked closely with us to understand the program and has invested significantly in new facilities and technologies to improve its capabilities as a supplier to the defence industry.

“By providing new opportunities for our supply chain, it puts us in a much better position to bid for and secure additional high value advanced manufacturing and further increase Australia’s work share on the Joint Strike Fighter program.”

“Securing defence industry contracts has provided the critical long-term, high-value work that has allowed us to transition from the car industry by developing bespoke Australian manufacturing capabilities.

“These long term programs allow Axiom to have the confidence to forge ahead with training, capability improvements and capital investments.”