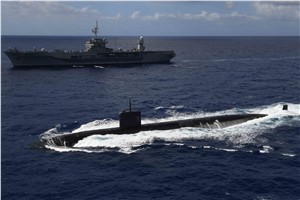 The SUBFAM gave the crew of Blue Ridge the chance to observe and operate with a submarine.

“The purpose of this training is to familiarize the crew of Blue Ridge with what a submarine looks like while at periscope depth,” said Lt. Cmdr. Robert Gore, the 7th Fleet submarine operations officer. “We’ve been given the opportunity to observe a submarine in a covert posture.”

Blue Ridge’s watchstanders use robust integrated tools to routinely receive, analyze and interpret data from all over the world to form a complete tactical picture of air, surface and subsurface contacts but due to the nature of its mission, watchfully operating with a submarine doesn’t often happen.

“This is an opportunity for our watchstanders to become familiar with what they might see if there really was a submarine out there,” said Capt. Craig Sicola, Blue Ridge’s commanding officer. “Blue Ridge is among the most technologically advanced ships in the world, and we welcomed the opportunity to flex our capabilities and practice integrated training with fellow Sailors from another warfare specialty.”

The exercise allowed Blue Ridge watchstanders to use these extensive command and control capabilities to recognize the signature of a submerged submarine and see how it tracks a subsurface contact.

Operations Specialist 2nd Class Jeremiah Ramos, a combat information center watchstander, had his first experience tracking a submarine. “This training exercise has increased our watch standers’ level of knowledge and readiness when it comes to a situation of encountering a submarine," he said.

USS Asheville's commanding officer also explained why this type of training is important.
“Supporting the U.S. 7th Fleet flagship was a unique opportunity for my crew to operate with our surface brothers and sisters, expand warfighting capability, and contribute to great integration of submarines with other platforms,” said Cmdr. Thomas Bullock, USS Asheville commanding officer. “Training scenarios like this are critical in our effort to improve readiness, increase lethality for our Forward Deployed Naval Forces warriors operating across all domains, and prepare for the high-end fight.”

Asheville, “The Ghost of the Coast,” is one of four Los Angeles-class fast-attack submarines assigned to commander, Submarine Squadron (CSS) 15, which is headquartred at Naval Base Guam. CSS-15 staff, submarines and submarine tenders in Guam are the U.S. Navy’s forward-deployed submarine force in the Pacific ready to meet global operations.