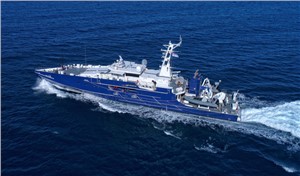 The RIBs, built and customised in BAE Systems’ Boats factory in Portsmouth, UK are being supplied to Australia's Austal to equip two Cape-class Patrol Boats they are building for the Trinidad and Tobago Coast Guard.

The P24 is a small and agile boat that can be deployed for a variety of tasks from counter-piracy and counter-narcotics missions, to force protection, rescue and logistics operations. It is used by a number of military customers, including the Royal Navy, but its versatility, fuel-efficiency and high-tech construction also lends itself to use by civil customers too. The MKIV version of the P24 incorporates the latest technologies in hull construction, including improved shock mitigation and propulsion, and provides extra safety to craft and crew by complying with rigorous Safety of Life at Sea (SOLAS) testing procedures, including drops, slams and self-righting trials, making them the vessel of choice for coast guard work.

“Our customer needs assurance that their sea boats can perform in life and death scenarios in harsh maritime environments, including in tropical storm and hurricane conditions. The pedigree of the P24, with its range of international customers including the military, as well as its SOLAS accreditation made it the ideal vessel for the job.”

Custom specification
The P24’s seating arrangements - six passengers and two crew - will also be specially configured for coast guard operations, including the ability to remove seats in order to boost carrying capacity and carry different loads including stretcher patients or different numbers of passengers.

In addition to the standard technical features of the MKIV P24 boat, custom modifications supplied to Austal included the installation of a ground plate that will enable Austal to supply and fit its own radio communications system.

Dr Brooke Hoskins, Director of Products and Training Services for BAE Systems’ Maritime Services business, said: “It’s great to see our P24s on their way to deliver an enhanced capability for the government of Trinidad and Tobago Coast Guard in collaboration with Austal.

“We have more than 60 years’ experience of producing specialist high-speed craft for military and civilian customers that include Special Forces, navies, armies, air forces and governments in more than 40 countries around the world. I am confident that the Trinidad and Tobago Coast Guard will be as delighted with them as all our other customers are.”

BAE Systems' other  high-performance sea boats include the Arctic range, a sea boat known for its speed, payload versatility and boarding ability, as used by Coastguard agencies and Lifeboat services, and the Seakeeper 7 series, a load-carrying Logistic Support Boat (LSB).

In the UK the P24 is used extensively in the Royal Navy’s surface fleet, being embarked on a number of warships and Royal Fleet Auxiliary vessels. These include the UK’s new aircraft carriers, HMS Queen Elizabeth and HMS Prince of Wales, all its Type 45 destroyers, Type 23 frigates and Offshore Patrol Vessels.