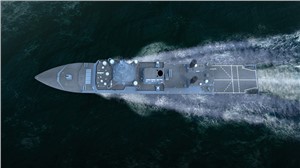 BAE Systems Australia’s shipbuilding business, ASC Shipbuilding, today signed a contract with Australian company BlueScope Steel AIS for the prototyping phase of the program, due to start at the end of this year.

Under the $2.6 million contract, BlueScope Steel AIS will deliver more than 1500 tonnes of steel plate to ASC Shipbuilding.

This is the first of a number of contracts ASC Shipbuilding will award to Australian businesses in the lead up to the Hunter program’s prototyping phase and realises the company’s commitment to use Australian steel for the $35 billion Hunter Class Frigate Program.

During prototyping, five representative ship ‘blocks’ will be built at the world-class Osborne Naval Shipyard in South Australia.

During this phase, the processes, systems, tools, facilities and workforce competencies will be extensively tested and refined before construction commences on the first frigate in 2022.

ASC Shipbuilding Managing Director, Craig Lockhart, said:
“Today’s contract signing is the first of many contracts that we will award to Australian businesses in coming months, as we count down to prototyping cut steel in December.

“This is a significant milestone and in awarding this contract to BlueScope Steel AIS we are confident that we have selected the company with the best capability while meeting our commitments to supporting Australian businesses and maximising Australian Industry Capability.

“During the prototyping phase we expect to spend 90 per cent of the value of the work required to construct the test blocks, in Australia, and I hope today’s contract signing is the start of a long-term relationship with BlueScope Steel AIS.

“The Hunter program is about more than just building warships; it is about building an enduring and uniquely Australian sovereign industrial capability that will support Australia’s continuous naval shipbuilding strategy for generations to come.”

“The company has a long and proud history of supplying steel into defence projects - in the 1990’s we supplied more than 20,000 tonnes of steel into the original ANZAC-Class Frigate fleet that the Hunter Class ships will replace.

“This contract is an important first step in potentially supplying steel into the build phase of the nine submarine hunting warships.

"Manufacturing is a key part of Australia’s history and today BlueScope is not only a world class manufacturer but we are also internationally competitive.”

ASC Shipbuilding will design and build nine Hunter Class ships, which will be among the world’s most advanced anti-submarine warfare frigates, for the Royal Australian Navy.

The steel contract comes as ASC Shipbuilding undertakes a range of initiatives to develop a sovereign industrial capability for Australia. These collaborative programs with industry and academia will form the foundation of the digital shipbuilding framework that will be developed further during prototyping, increasing Australian industry’s capability and capacity to contribute to complex naval shipbuilding programs, now and in the future.