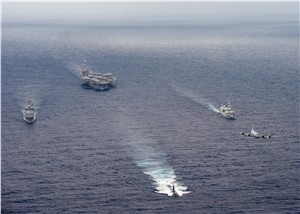 The Harry S. Truman Carrier Strike Group (HSTCSG), as well as Atlantic-based Navy submarines and aircraft, alongside forces from Canada, Denmark, and the U.S. Air Force were able to learn from the other services and combatant commanders while advancing tactical and operational proficiency in high-end warfare.
“Exercise Vigilant Osprey provided the framework to operate alongside our partners in the Atlantic. Any opportunity we get to integrate and synchronize capabilities and capacities at-sea in today’s complex, multi-domain, and contested environment is invaluable training,” said Adm. Christopher Grady, NAVNORTH commander. “While any navy can surge forces, none of us can surge trust. This week we were able to further strengthen our strong partner ties knowing that we will not fight alone.”

“This was an excellent advanced readiness opportunity for Canadian and American maritime forces,” explained Rear-Admiral Craig Baines, Commander Maritime Forces Atlantic (MARLANT). “The scenarios utilized during these events enable our mutual ability to operate in a multi-threat environment, in which coordination and integration are absolutely critical for our success in responding to any crisis in our waters or internationally.”

“The Atlantic is a contested environment, and our partnerships strengthen our advantage and complicate potential adversary decision making,” said Vice Adm. Andrew Lewis, Commander, U.S. 2nd Fleet and Maritime Command Element- East. “Operating with multiple combatant commands, other services, and learning from our Canadian and Danish Allies in the North Atlantic enhances our collective capabilities. We are stronger together.”

The naming for exercise Vigilant Osprey is in homage to the people and geographic location in which it was conducted. Vigilant is typically used in NORTHCOM exercises, and Osprey, Nova Scotia’s provincial bird, is a tribute to the Canadian participants. The naming of the exercise is to honor the victims of the mass shooting which occurred in Nova Scotia several weeks ago, the loss of six aircrew and sailors in a military helicopter crash, and to Capt. Jennifer Casey, the Canadian Forces Snowbird’s Public Affairs Officer who was killed in a jet crash this month.

The strike group recently operated under the command of U.S. 5th and 6th Fleets, and the deployment serves as another example of how our Naval forces continue to be the most inherently flexible & available assets in times of crisis, providing presence & capabilities when needed. HSTCSG remains at sea in the Atlantic, conducting operations and is ready for tasking, while protecting the crew from the risks posed by the COVID-19 pandemic.