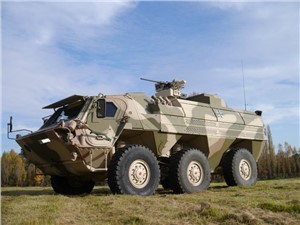 With over 1,400 units built, Rheinmetall’s 6x6 Fuchs/Fox armoured transport vehicle is one of the world’s most widely used tactical wheeled vehicles, having accumulated enormous operational experience. The armed forces of numerous nations deploy multiple variants of the Fuchs/Fox, which, among other things, can be variously configured as an armoured personnel carrier, a command post, a field ambulance or for a mobile CBRN reconnaissance role.

The CBRN reconnaissance version has been successfully deployed in a number of crisis regions around the world, countering numerous threats. Nearly 300 of these CBRN recce vehicles have been built so far and have proven their reliability in service with the US Army, the German Bundeswehr as well as the armed forces of the United Arab Emirates, the United Kingdom, Kuwait, the Netherlands and Norway. The heart of the CBRN reconnaissance version of the Fuchs/Fox is a fully integrated suite of sensors and equipment for detecting and identifying nuclear, biological and chemical warfare agents.

The Bundeswehr has been operating numerous variants of the Fuchs/Fox ever since 1979. Underscoring the Germany military’s trust in the robust reliability of the Fuchs/Fox, it plays an important role in international peacekeeping missions in Afghanistan and Mali. Compared to its predecessors, the Fuchs/Fox 1A8 – the Bundeswehr’s most advanced version of the vehicle – delivers considerably improved protection against ballistic threats, landmines and IEDs. Among the principal modifications of the Fuchs/Fox 1A8 are structural changes to the hull, new axles, reinforced wheel housings, doors and window frames as well as additional stowage compartments and other external reinforcements. Rheinmetall will be upgrading a total of 272 Bundes¬wehr Fuchs/Fox vehicles to the current 1A8 standard by the end of 2020.

Furthermore, Rheinmetall has developed an even more advanced version of the vehicle, which features a new power pack, a new transfer case, a new brake system, an improved steering system as well as improved digital camera and visualization systems. This makes the Fuchs/Fox even more manoeuvrable in off-road terrain and considerably easier to handle. With a fleet availability ratio of over 90%, the Fuchs/Fox delivers an unmatched level of operational readiness, making it one of the most reliable and popular vehicles in the German Army’s inventory.

Deriving from the Fuchs/Fox 1, Rheinmetall's Fuchs/Fox 2 is an advanced export version of the original vehicle. Among other things, it features increased roof height for a roomier interior, a more powerful engine, a modernized drivetrain and suspension system as well as a digital electric backbone. The Fuchs/Fox 2 is in service with the armed forces of the United Arab Emirates, Kuwait and one other customer in the MENA region.

Its great popularity with a wide range of international users, and the related continuous product care by Rheinmetall, assures that the Fuc

Tell a friend:
Fit at forty