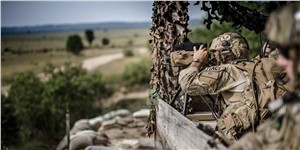 At the DSEI 2019 exhibition in London (10-13 September), Leonardo has announced that it has sold over 600 units of its Type 163 Laser Target Designator (LTD) to 16 customers including Italy, the U.S., Australia, Canada, New Zealand, Belgium, Denmark, Finland, France, Latvia and the Netherlands. The success of the product reinforces Leonardo’s position as the international leader in the high-energy military laser market, with the Company’s Edinburgh, Scotland-based laser business accounting for over 70% of global sales for applications on airborne platforms and around 60% of all sales in total, including for ground-based applications.

The Type 163 LTD is used by Joint Terminal Attack Controllers (JTACs), the troops responsible for directing close air support. Around 550 units have been delivered to date and users of the system include U.S. Special Operations Forces. The Type 163 LTD has been battle-tested during multiple operations in the Middle East where users have benefitted from immediate and accurate target identification capabilities.

To create the system, Leonardo has drawn on its experience in building lasers for airborne applications, where size, weight and power requirements are restrictive. The result is a man-portable device which provides laser designation and range-finding in a package weighing less than 2.3kg, with a combination of portability and energy output that is still unmatched in the market, even five years since the Type 163 originally went into service.

Leonardo has now produced more than 5000 high-energy military lasers, with a significant milestone in 2018 seeing the Company delivering its 3000th laser to Lockheed Martin for programmes including the F-35, Apache helicopter and Sniper pod. Leonardo also provides the lasers for Northrop Grumman Corporation’s LITENING pod and is a part of the UK Dragonfire consortium which is working to develop a Laser Directed Energy Weapon (LDEW) Capability Demonstrator Programme (CDP) on behalf of the UK Ministry of Defence.

Tell a friend:
Leonardo Announces Sales of Over 600 Man-portable Laser Designators to NATO and NATO-partner Countries