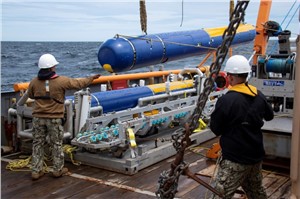 The Knifefish system is designed for deployment from the littoral combat ship (LCS), vessels of opportunity or from shore to detect and classify buried, bottom and volume mines in high-clutter environments. Knifefish is a critical element of the LCS Mine Countermeasure Mission Package and will reduce risk to Navy personnel and equipment.

The Knifefish system, which consists of two unmanned undersea vehicles along with support systems and equipment, uses cutting-edge low-frequency broadband sonar and automated target recognition software technology developed by the Naval Research Laboratory and successfully transitioned to industry. It acts as an off-board sensor while the host ship stays outside the mine field boundaries.

Knifefish’s common open systems architecture design and modularity allow for platform ?exibility and quick reconfiguration of the mission package to respond to evolving and dynamic mission requirements. Planned block upgrades will improve its sensors and automated target recognition software to keep pace with mine threats.

Formal Developmental Testing and an Operational Assessment were conducted from January through May 2019 in multiple locations off the coasts of Massachusetts and Florida. The Knifefish tests involved end-to-end operational minehunting missions against a deployed, simulated target field.

Operations performed by fleet Sailors during Developmental Testing and Operational Assessment included mission planning, launching and recovering the system, monitoring the sorties and processing data. The unmanned undersea vehicles were deployed from a support craft in the vessels of opportunity configuration for all test events in order to provide a characterization of the performance of the entire Knifefish system, including the launch and recovery subsystem.

A full-rate production decision is expected in fiscal year 2022 after additional testing of LRIP systems. The Navy plans to procure 30 Knifefish systems in all, 24 in support of LCS Mine Countermeasure Mission Packages and an additional six systems for deployment from vessels of opportunity.