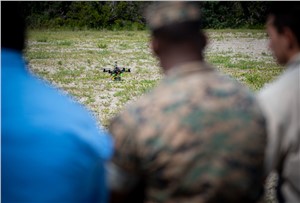 The Navy and Marine Corps worked to provide a platform for more than 35 government agencies, industry and academia to test technology prototypes emphasizing maneuver, logistics and force protection capabilities.

ANTX East is the fourth in a series of exercises designed to identify capability options for the warfighter aimed at addressing emerging operational requirements within 12 to 18 months.

“NIWC Atlantic is a leader in technical management,” said Sanders. “The research and development work displayed at ANTX East illustrates our capability in delivering advanced technologies that supports technical superiority for the Navy and Marine Corps.”

“It has been a joint effort between the Marine Corps, the Navy and the Naval Research and Development establishment to look at technologies we may be procuring or prototyping in the future,” said Lt. Col. Jim Foley, Marine Corps Warfighting Laboratory Ellis Group planning officer.

Both events are part of the multi-year prototyping and experimentation campaign titled “Fight the Naval Force Forward.”

The ANTX series uses the Tactics and Technology Exploration and Experimentation (TnTE2) method, developed in 2017, which provides an agile process for developers to receive real-time input on technology and rapidly turn credible concepts into fielded capabilities.

“This method serves to inform our NIWC team on ways to quickly improve and adjust our technology to meet the operational needs of our warfighters,” said Regal.

During the week, NIWC Atlantic demoed prototypes focused on logistics, command and control, strike, and electronic attack and warfare. A few of the technologies assessed included small-unmanned aerial systems, command and control enhancements and 360-video capabilities captured through semi-autonomous systems.

“The two technologies our teams represented at ANTX are significant because they leverage our rapid prototyping capabilities – all of our development was done in house, from the additive manufacturing to the printing of the electronic circuit boards, and they represent data analytics and data processing at the tactical edge,” said Dr. Laura Tolliver, NIWC Atlantic scientist.

Following the exercise, teams will take feedback from the assessors and the warfighter and discuss short and long-term goals and ways to incorporate the feedback into future iterations of development.

“Getting out here in the field and being able to test in an operational environment, seeing our military members and hearing how they use their technology and understanding the risks they take to protect us really provides us perspective on how important our mission is and also develop better products,” said Tolliver.

“Collaboration is a foundational principle for the work that NIWC Atlantic performs every day,” said Pete Reddy, NIWC Atlantic acting executive director. “The partnerships and teamwork formed with the Marine Corps, Navy, industry and academia during this ANTX are vital to our information warfare mission.”