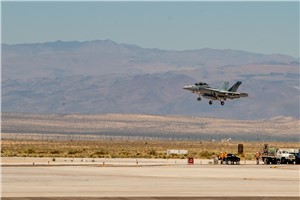 “I’m incredibly excited to have the opportunity to put planes in the sky today,” said Capt. Jesse Hilliker, VX-9’s commanding officer. “I feel like this is the next step in the recovery process and getting the base back to where it needs to be and doing what they do best: launching aircraft and executing missions.”

Casualties recorded near the base and airfield included water and structural damage and loss of power to various buildings due to downed power lines.

“I remember seeing the bookshelves and stuff starting to topple over during the first earthquake and then answering the call to help assist the relief efforts later that night,” said Lt. Angela Rousch, NAWSCL’s air operations officer. “I think a major challenge was accomplishing a lot of progress following the first earthquake only to reset back to step one after the second earthquake.”

Another challenge associated with resuming normal operations involved cooperating clean-up efforts between Sailors who were temporarily displaced from their assigned buildings and offices.

“VX-9 was very courteous in making their spaces available to our weather team, which accelerated the turnaround,” said Rousch. “We all came up with great ideas and solutions to get the airfield up and running. Being able to resume flight operations five days after a natural disaster is a phenomenal turnaround.”

While base access has been restricted to only mission essential personnel, Sailors worked around the clock until the airfield and terminal were operational.

“Relocating workspaces, performing our duties and being a part of the disaster response- it hasn’t been easy on any of us,” said Chief Air Traffic Controller William Gernert, stationed at NAWSCL. “Throughout this experience, I’ve seen immense pride, professionalism and dedication from everyone. It feels good seeing a vital piece of our base up and ready again.”