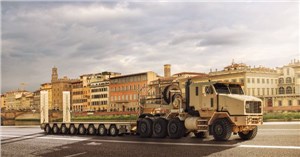 Oshkosh Defense, LLC, an Oshkosh Corporation (NYSE:OSK) company, announced today that the U.S. Army Tank-automotive and Armaments Command (TACOM) has awarded Oshkosh Defense and partner, Broshuis B.V., a contract to produce semitrailers for the Heavy Equipment Transporter (HET).  The contract award is in response to an Operational Needs Statement (ONS) from the U.S. Army Europe for a semitrailer that can deliver increased payload capability while gaining European road permissions.

The HET was designed by Oshkosh Defense to provide rapid movement of mission-critical equipment including tanks, armored vehicles, and recovery vehicles.  Oshkosh Defense has been producing the HET for the U.S. Army since 1976.  Broshuis B.V., has over 130 years of experience providing innovative semitrailers for specialized commercial and military transport.

“Oshkosh Defense and our partner, Broshuis B.V., each bring a unique set of skills and experiences to this program,” said Pat Williams, Vice President and General Manager of U.S. Army and U.S. Marine Corps Programs for Oshkosh Defense.  “As the OEM of the HET, not only do we understand this vehicle inside and out, but we also have a proven record of success delivering critical vehicle accessories and upgrades that our troops rely on.  By combining our experience with the trailer expertise of our partner, Broshuis B.V., we were able to provide the U.S. Army with an efficient, durable semitrailer that can be relied upon to ensure heavy equipment arrives in mission-ready condition.”

The U.S. Army’s selection comes after two prototypes successfully completed a 3-month test and evaluation phase at Aberdeen Test Center in Maryland.  The semitrailers were evaluated on their payload capacity, transportability, loading and unloading efficiency of operational and disabled vehicles, and overall logistics capability.

“We are proud that the U.S. Army has trusted us to produce the HET ONS semitrailer, and we look forward to getting these fielded with our Soldiers in Europe,” Williams continued.