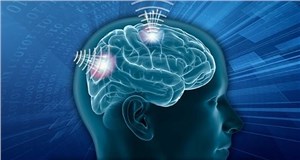 Battelle has for years successfully demonstrated brain-computer interface (BCI) projects—just look at NeuroLife®, which has enabled a quadriplegic man to move his hand again using his thoughts. Now, the government’s forward-thinking Defense Advanced Research Projects Agency (DARPA) has awarded a contract to a Battelle-led team that pushes researchers into the realm of what was once considered science fiction.

Imagine this: A soldier puts on a helmet and uses his or her thoughts alone to control multiple unmanned vehicles or a bomb disposal robot. That’s the basis for this effort for DARPA’s Next-Generation Non-Surgical Neurotechnology (N3) program. The N3 program seeks development of high-performance, bi-directional brain-machine interfaces for able-bodied service members. Most of the current BCI research, including Battelle’s NeuroLife technology, focuses on helping people with disabilities who must undergo invasive implant procedures, including brain surgery, to enable a BCI that can restore lost function. For the next BCI leap, in which the technology can be used by healthy military service members, it’s imperative to find lower-risk and less-invasive options.

Battelle’s N3 concept for a minimally invasive neural interface system, called BrainSTORMS (Brain System to Transmit Or Receive Magnetoelectric Signals), involves the development of a novel nanotransducer that could be temporarily introduced into the body via injection and then directed to a specific area of the brain to help complete a task through communication with a helmet-based transceiver. Upon completion, the nanotransducer will be magnetically guided out of the brain and into the bloodstream to be processed out of the body.

The nanotransducer would use magnetoelectric nanoparticles to establish a bi-directional communication channel with the brain. Neurons in the brain operate through electrical signals. The magnetic core of the nanotransducers would convert the neural electrical signals into magnetic ones that would be sent through the skull to the helmet-based transceiver worn by the user. The helmet transceiver could also send magnetic signals back to the nanotransducers where they would be converted to electrical impulses capable of being processed by the neurons, enabling two-way communication to and from the brain.

“This is one of the most exciting and challenging projects I have worked on,” said Sharma. “With BrainSTORMS, we will again be pushing the limits engineering and physics. If successful, this technology would not only provide a safe and efficient way to facilitate human machine interactions, but also has the potential to revolutionize the study of the nervous system.”

Sharma’s experience and contacts in the BCI field are key to the effort’s success. Battelle will apply its expertise in neural decoding, artificial intelligence, hardware engineering, in vitro electrophysiology and systems integration to combine the various aspects of the project. But all-stars were needed to complete the team. “We knew we needed a strong team if we wanted to succeed in this mission,” said Sharma. “Our collaborators are experts in important areas for the program.”

Sakhrat Khizroev at the University of Miami will lead nanoparticle synthesis and characterization. Together with Ping Liang, Khizroev has pioneered magnetoelectric nanotransducers for medical applications. Cellular Nanomed Inc., a California-based small business led by Liang, will develop the external transceiver technology. Liang and Khizroev have also worked together on smart array technologies for the read and write of brain-computer interface signals.

Doug Weber at the University of Pittsburgh will lead the preclinical safety and efficacy studies, bringing decades of experience in neural engineering research and development. His team has led several projects focused on developing closed-loop neurotechnology systems that enable people to control and feel prosthetic limbs through direct connections to the nervous system. He and his colleagues are currently managing multiple first-in-human trials of novel neurotechnology systems at the University of Pittsburgh.

Before the end of the project, Andy McKinley and Justin Estepp at the Air Force Research Laboratory will conduct human demonstration studies. McKinley is a leader in the use of brain stimulation technologies for cognitive performance optimization.

Battelle recently began the first phase of the program with $2 million in funding to demonstrate the core concept of the technology. If the team’s concept proves successful, Battelle will receive additional funding for the second and third phases of the program. The full contract is worth approximately $20 million over four years for the Battelle team.