Otokar Aims to Grow in Africa 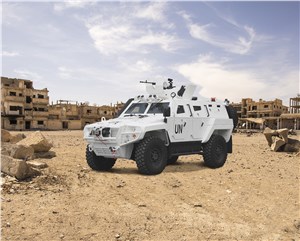 Otokar, a Koc Group Company, with over 30 years of experience in military vehicles, participates in Shield Africa International Security & Defence exhibition in Abidjan, in Côte d'Ivoire. During the exhibition, Otokar will promote its own design armoured tactical vehicles as well as turret systems.

Stating that Otokar armoured vehicles have been serving in 32 countries, Serdar Görgüç, Otokar General Manager said, "Otokar continues to strengthen its position in the international defence industry with its technological superiority, engineering power, design capabilities and over 30 years of experience in military vehicles. The success of Otokar's armoured vehicles has always been a reference for new orders. Today, more than 30 thousand military vehicles designed to meet user expectations and needs against present day and future threats are actively used in several different missions in Africa, Asia, the Middle East, and Central Europe. Africa is among our principal markets and we aim to increase our presence in the continent. This is our first attendance in Shield Africa exhibition and we believe it will be a good opportunity for us to reinforce our relationships in this sense."

Serdar Görgüç underlined that Otokar as a registered NATO and United Nations supplier is delivering the best vehicles with modern equipment in line with the specific needs of users in Africa, "We have been able to gain significant experience about responding to the needs and expectations of this region through the military vehicles currently serving here. Otokar has also started to stand out in global scale not just for its products with fully-owned intellectual property rights, but also with its know-how, engineering, R&D and technology transfer capabilities. In addition to promoting our broad product range during the exhibition, we will also look for the new opportunities including technology transfer."

Tell a friend:
Otokar Aims to Grow in Africa