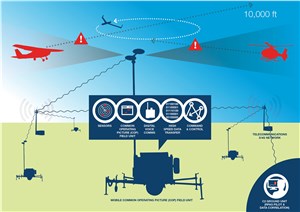 Insitu, a wholly-owned subsidiary of The Boeing Company, announced the successful completion of a flight demonstration for its ground-based Unmanned Aerial Systems (UASs) airspace situational awareness system. Insitu is tackling one of the toughest challenges for UASs — the ability to detect nearby aircraft flying both within and beyond UAS operators' line of sight.

Insitu — in collaboration with Boeing Phantom Works International — designed, developed, and tested the airspace situational awareness system in Australia under a program sponsored by the Queensland Government. The system is designed as one of the optional "layers" of safety to enable broad-area, beyond visual line of sight (BVLOS) capability for commercial UAS operations by providing airspace situational awareness for UAS operators, specifically to help detect and avoid so called "non-cooperative" traffic. The system incorporates radio over internet protocol (ROIP) to expand its ability to communicate with air traffic control and local traffic in the operations area.

Currently, UAS ground control operators fly their aircraft only to a point where the UAS is within line-of-sight, as operators are unable to discern the location of other aircraft within the same airspace, potentially creating hazardous flying conditions. Using either mobile or fixed infrastructure, the system combines Airborne Dependent Surveillance Broadcasts (ADS-B) and transponder returns to provide a correlated common operating picture — enabling UAS operators at ground control systems to see real-time information about the local airspace.

Remotely detecting and tracking other airspace users, the system immediately sends the air traffic information back to a ground-control station — assisting operators in safely operating UASs over extended ranges.

Insitu conducted a test flight of its BVLOS system at the Mississippi State University (MSU) Raspet Flight Center in November 2017. This successful flight showcased the work done by Insitu, the MSU Raspet Flight Center, and Boeing Phantom Works International, while demonstrating a key airspace integration tool which potentially could be used in the United States.

"We now have integrated a significant capability that will dramatically improve airspace safety," said Dara Albouyeh, Chief Engineer, Certification, at Insitu. "This successful demonstration of our ground-based situational awareness system confirmed our ability to achieve deconfliction of the air traffic at the Choctaw County Airport and surrounding areas."

The application of UAS enabling-technologies will benefit a wide range of sectors including mining, oil and gas operations, search and rescue, environmental management, and more. The technology supports UAS data collection for analysis in areas such as infrastructure monitoring and inspection, change detection, subsidence, stockpile volume measurements, intelligence, and others. The Insitu system will provide operators with the ability to collect and analyze data using an airborne platform such as Insitu's ScanEagle® UAS on a broad scale, and turn that data into business knowledge for informed decision-making.

"We're developing our ability to fly long distances with our UASs that satisfies the airspace regulators, providing UAS operators with access to information that we previously just couldn't obtain otherwise," said Mark Bauman, Vice President and General Manager, Insitu Commercial. "Now, we can prevent conflicts far more reliably, and will be able to access wide areas for commercial purposes," Bauman explained. "This system shows great promise as one of many solutions or "layers" that we are pursuing to increase safety and allow BVLOS flights in the U.S."