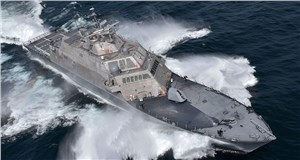 This contract was awarded to OSI after an extensive competitive process that was conducted by Lockheed Martin over several months.  OSI’s IBNS design directly supports the Navy’s push to improve the affordability of the LCS, while updating and upgrading the integrated bridge and navigation capabilities.

“We are pleased to have signed this very important contract with Lockheed Martin. Over the years, OSI has built a strong business relationship with Lockheed Martin through the successful delivery of a number of projects for customers around the world,” said, Ken Kirkpatrick, OSI President and CEO.  “The U.S. naval market presents a significant growth opportunity for OSI and the LCS program provides us our first big step into this huge market.”

The system is designed for warships and conforms to American Bureau of Shipping (ABS) Class Rules for Navigational Integrated Bridge System (NIBS).  In addition, it has received Marine Equipment Directive (MED) Type Approval certification from DNV GL as an Integrated Navigation System (INS).

Tell a friend:
OSI Signs Contract With LM to Deliver IBNS for the US Navy LCS Program