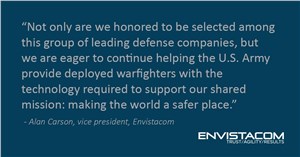 Today at the 2017 DoDIIS Worldwide Conference, Envistacom announced it has been selected by the U.S. Army as a prime contractor to compete for task orders under the Army Contracting Command (ACC) Deployable Adaptive Global Responder Support (DAGRS) contract vehicle, representing an indefinite delivery/indefinite quantity (IDIQ) opportunity of $480 million over five years.

Fifteen bids were submitted to ACC, and Envistacom is one of ten defense companies awarded with the opportunity to support Department of Defense (DoD) technical development and support, as well as operational integration missions.

“Not only are we honored to be selected among this group of leading defense companies, but we are eager to continue helping the U.S. Army provide deployed warfighters with the technology required to support our shared mission: making the world a safer place,” said Alan Carson, vice president, Envistacom. “The DAGRS prime contract award is a testament to the Army’s trust in Envistacom’s ability to deliver rapid response capabilities, necessary to counter emerging, asymmetric threats in some of the most austere locations in the world.”

The company’s sixth major prime IDIQ contract vehicle, the DAGRS award builds on Envistacom’s recent announcement of a $10 million five-year contract to provide communications and operations support to the U.S. Army in Landstuhl, Germany. With these new contracts in place, Envistacom is furthering its remit with the DoD, and is thus positioned to continue rapidly expanding its global network of defense technology experts and integrated solutions.

With a presence in six U.S. states and 11 countries, the Atlanta-based defense contractor specializes in counterterrorism/asymmetric warfare, cybersecurity and communication networks, and was recently recognized as one of Georgia’s fastest-growing companies.