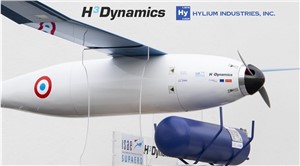 Moving to liquid hydrogen represents a significant capability leap for small electric-powered unmanned systems. Cryogenic (liquid) hydrogen stores 3 times more energy as compressed gas in the same given volume. This means delivery drones will be able to fly further, mapping and ISR missions could be done on a much bigger scale.

To illustrate the jump in performance, the same 25kg hydrogen-electric propulsion UAV demonstrated by H3 Dynamics last July in France, will be able to fly over 900km with a single fill. With pressurized hydrogen, that range reduces to 400km, which is still 3 times more than a battery-powered equivalent.

“When combined, our global best-in-class solutions achieve the global performance limit for low-altitude electric powered flight” says Taras Wankewycz, CEO H3 Dynamics. “We are proud to be working with Hylium to move hydrogen-electric flight propulsion to the next level”

Now all the various forms of hydogen drones and UAVs powered by H3 Dynamics including hydrogen airships, multi-rotors, vertical take-off and landing (VTOL), have a way to further boost flight durations by another factor of 3 over pressurized hydrogen systems, or a factor of 10 compared to batteries.

Developed in South Korea, Hylium’s breakthrough technology provides one of the most advanced solutions and has already been proven in a number of applications. South Korea is also leading the development for LH2 standardisation. One local proposal was accepted as a draft standard by a global ISO committee.

Hylium and H3 Dynamics technologies are currently being integrated to attempt a 3,300km crossing of the South Atlantic, in a program led by ISAE SUPAERO Toulouse, one of the world’s leading aerospace engineering schools. H3 Dynamics’ team developed a special fuselage design that can store a small LH2 tank and manage the thermal behavior of all the propulsion sub-systems.

LH2 technology will also be a next step in H3 Dynamics’ hydrogen-electric propulsor nacelles roadmap. A first twin engine cargo drone powered by these self-contained nacelles took off in the sky of Paris during the summer 2022, using 2 compressed hydrogen tanks – one in each nacelle. The goal now will be to switch them out for liquid hydrogen tanks with a lighter construction and a higher fuel capacity.