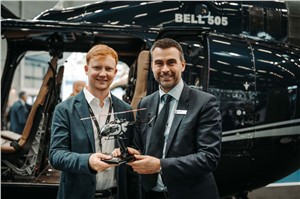 “It’s exciting to see the demand for the Bell 505 continue to grow within Europe across many industries,” said Patrick Moulay, senior vice president, International Commercial Sales, Bell. “We see great potential for Bell within the Baltics, and we are delighted to welcome Airbourne to our ever-growing list of IRs across Europe to expand our support.”

“The 505 adapts well to Europe’s varied terrain, and our customers have a diverse range of uses for the aircraft. From taking tourists sightseeing to training pilots to land on top of mountains, the 505 continues to leave an amazing impression on our customers and the passengers they fly,” continued Moulay.

“Our appointment as the IR for the Baltic states will mark the start of a new and exciting chapter in our relationship with Bell,” said Max Lunov, owner, Airbourne. “The 505’s high-performance and versatility means it easily adapts to the various needs of our customers. In the case of these aircraft, we’ll see them used for private travel and pilot training.”

In August, Bell announced the 400th Bell 505 delivery to a customer in the United Kingdom since its launch in 2017. Other recent Bell 505 deliveries in Europe include one aircraft to a private customer in Greece, two to JB Investments in Poland and two to Karen SA in Switzerland. A total of 78 Bell 505s have now been delivered across the continent.

The Bell 505 is the most versatile aircraft in the short light single class. Its powerful Safran Arrius 2R engine and dual-channel FADEC, combined with its advanced Garmin G1000H NXi avionics suite, means the Bell 505 is suited to a wide of range of missions, including pilot training, sightseeing, corporate transport, utility and public safety. Last year, the Bell 505 was certified by the European Union Aviation Safety Agency (EASA) to carry up to 2,000 pounds (907 kg) using its cargo hook, further adding to the 505’s impressive utilitarian capabilities.

Bell is exhibiting at European Rotors in Cologne, Germany from 8 to 10 November 2022 at Booth 1005 in Hall K_08. The Bell 505 in corporate configuration and the Bell 429 in HEMS configuration will be on display.