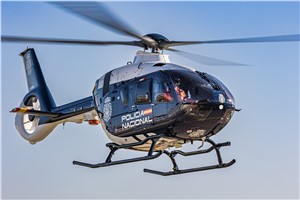 Airbus has delivered the first two H135s to the Spanish Guardia Civil and National Police under the 36-unit contract signed with the General Directorate for Armaments and Materiel (DGAM) at the end of 2021 to supply the Ministry of Defence and the Ministry of Interior. The Minister of the Interior, Fernando Grande-Marlaska, and Bruno Even, CEO of Airbus Helicopters, along with Fernando Lombo, Managing Director of Airbus Helicopters in Spain, were present at the handover ceremony that took place at the Airbus plant in Albacete.

The new helicopters will enable the National Police and Guardia Civil to replace BO105 helicopters in a wide range of missions including police, surveillance, and rescue activities. In total, the Ministry of Interior will receive 18 units.

"We are proud that the new H135s, which will join the 31 helicopters that are already operated by the Ministry of the Interior, will help law enforcement agencies to continue protecting and saving lives throughout Spain," said Bruno Even, CEO of Airbus Helicopters. "The H135 has proven to be a much-loved helicopter in Spain, where more than 80 units are already flying all kinds of essential missions for more than 25 years. Just 10 months after the contract was signed, this delivery is further proof of this Iberian success story.”

As for the Spanish Air Force and Navy, which will receive eleven and seven H135s respectively, deliveries will begin next year and will be added to the 16 helicopters already operated by the Spanish Army for training and support missions for the Military Emergency Unit (UME). From 2023 onwards, the three armed forces will be able to benefit from synergies in terms of training, operation, and maintenance.

The Airbus light twin-engine H135 is equipped with the most advanced technologies available, including Airbus Helicopters' Helionix avionics suite. More than 1,350 H135 helicopters are operated by 300 operators in 64 countries. The fleet has accumulated more than 6 million flight hours. The H135 is the fleet leader in the twin-engine market segment with more than 200 helicopters flying all over the world for law enforcement missions.

Tell a friend:
Delivery of the 1st 2 H135s to the Spanish Ministry of Interior