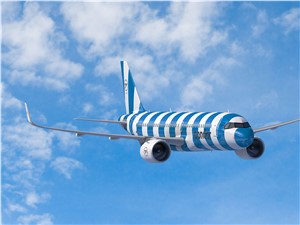 Pratt & Whitney announced today that Condor Flugdienst GmbH (“Condor”) has selected Pratt & Whitney GTF™ engines to power a mix of 41 leased and purchased Airbus A320neo family aircraft. This marks the airline’s first GTF-powered aircraft and an extension of its relationship with Pratt & Whitney. The airline is currently scheduled to receive the first of these aircraft starting in 2024.

“With our new A320neo and A321neo aircraft, we are consistently developing our fleet and ourselves as a company, and also taking care of our own ambition to enable responsible and at the same time comfortable travel with significantly reduced carbon emissions, lower fuel consumption and less noise,” said Ralf Teckentrup, chairman and chief executive officer at Condor. “With Pratt & Whitney’s leadership in efficiency and sustainability, the GTF engine was the clear choice to modernize our fleet.”

Condor has been taking its guests to beautiful holiday destinations for more than 66 years. Every year, more than 9 million guests fly with Condor to around 90 destinations in Europe, Africa and America. Currently flying PW4000-powered Boeing 767-300ER aircraft, Condor and Pratt & Whitney established their relationship more than 60 years ago with the Wasp-powered Convair CV-240 aircraft. In subsequent years the airline operated a full range of Pratt & Whitney-powered aircraft, including the DC-8, 707, 727, 737, 747 and 757.