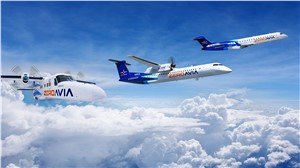 ZeroAvia, the leader in hydrogen-electric, zero-emission aviation, today announced $30 million in funding from new investors Barclays Sustainable Impact Capital, NEOM and AENU, with International Airlines Group (IAG) adding to prior investment from the Group, bringing the Series B round to $68 million.

ZeroAvia counts three major airline groups as strategic investors in the shape of IAG, United Airlines and Alaska Airlines. The fresh investment will further advance ZeroAvia’s 2-5MW hydrogen-electric powertrain development program, which aims to power 40-80 seat aircraft with zero-emission engines by 2026. Larger aircraft will use liquid hydrogen fuel as opposed to gaseous for smaller aircraft, allowing a higher energy density and increased range and payload. Being an early mover in this space opens up the potential to capture a significant chunk of the regional aviation engine market.

ZeroAvia will also deploy the funding for building infrastructure at airport sites, which will support live demonstrations of its Hydrogen Airport Refueling Ecosystem (HARE), in preparation for routes carrying passengers and cargo in the next handful of years.

Val Miftakhov, ZeroAvia, Founder & CEO, said: “Each of these star investors brings a unique perspective and strength to ZeroAvia’s wider team—from one of the world’s biggest airline groups, one of the largest and most historic banks, to the ambitious project to build the world’s first zero-carbon metropolis, as well as a pure-play impact investor. Our new investors are each looking at our journey through a different lens, but all energized by our mission to enable zero-emission flight using hydrogen-electric engines. This is a great recognition of ZeroAvia’s leadership in the space, fueled by real, tangible achievements.”

IAG combines leading airlines in Ireland, Spain, and the UK, including Aer Lingus, British Airways, Iberia, LEVEL and Vueling. It was the first airline group worldwide to commit to achieving net-zero emissions by 2050 and began partnering with ZeroAvia in 2020, when its Hangar 51 accelerator programme featured it as a participant.

Luis Gallego, IAG's chief executive, said: “IAG has been leading aviation's efforts towards achieving net-zero emissions by 2050. We are investing in a range of solutions, including hydrogen, which we believe has huge potential, especially for short-haul routes.”

This is the 14th overall investment made by Barclays through their Sustainable Impact Capital Programme, which has a mandate to invest up to £175m of equity capital in sustainability-focused start-ups by 2025.

Steven Poulter, Head of Principal Structuring and Investments at Barclays, said: “The aviation industry will require significant and recurring investment in the years ahead to ensure its technological evolution can keep pace with global decarbonisation targets. ZeroAvia is an innovative, industry-leading aviation business—we are delighted to support its ambition towards zero-emission flight, and look forward to seeing them accelerate change in the sector.”

NEOM is leveraging green hydrogen as a key power source in delivering the world’s first zero-carbon city. NEOM can produce green hydrogen for power at scale and recently launched a Hydrogen Innovation and Development Center. In addition to the investment relationship, ZeroAvia and NEOM will partner to bring fleets of ZeroAvia fuel cell-powered aircraft of all size classes to the region.

John Selden, CEO of NEOM Airports, said: “Aviation will play a key role in supporting our work to deliver a zero-carbon city, and we envisage hydrogen-electric aircraft connecting NEOM to regional destinations and beyond via zero-emission flight. From NEOM Bay Airport, a flight to Cairo, for example, will be well within range of a 20-seat turboprop aircraft powered by ZeroAvia’s hydrogen fuel cell engine by the end of the decade.”

AENU, an evergreen impact fund that invests multi-stage in climate-tech and social impact companies in Europe and the U.S., is making ZeroAvia its first investment into green aviation, applying its mission to drive environmental sustainability to one of the hardest to abate sectors.

The funding announcement comes in the midst of ground testing of ZeroAvia’s ZA600 powertrain at its UK R&D facility at Cotswold Airport, part of Project HyFlyer II which aims to demonstrate hydrogen-electric flight in a Dornier 228 aircraft. This is the second in a family of projects designed to pioneer the technology, supported by the UK Government through matched grant funding provided by the Department for Business, Energy and Industrial Strategy (BEIS), Innovate UK and the Aerospace Technology Institute (ATI). ZeroAvia also recently welcomed a second Dornier 228 testbed to its expanded facility at Hollister, CA.