CFM Signs Agreement With Air France-KLM to Power the Airline 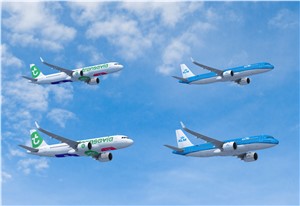 Air France-KLM has finalized the purchase of 200 CFM LEAP-1A engines to power its new fleet of Airbus A320neo and A321neo aircraft, after entering into exclusive negotiations in April.

Air France-KLM is a longstanding CFM customer and its airlines currently operate CFM56-7B and CFM56-5B engines that power the Boeing Next-Generation 737 and Airbus A320ceo fleets, respectively.

“We are honored to further expand our partnership with one of the industry’s largest groups and to be an integral part of Air France-KLM’s sustainability strategy”, said Gaël Méheust, president and CEO of CFM International. “This renewed trust is a valuable recognition of LEAP engine performances in terms of sustainability and fuel efficiency. We are looking forward to introducing the LEAP into their new fleet and to supporting KLM, Transavia Netherlands and Transavia France operations.”

The advanced LEAP engine continues to set new industry standards for fuel efficiency and asset utilization, logging more than 20 million engine flight hours and nine million flight cycles in commercial operation. The fleet is providing 15 percent better fuel consumption and lower CO2 emissions, as well as a significant improvement in noise compared to previous generation engines. Since its entry into service in 2016, the LEAP engine allowed our customers to save more than 14 million tons of CO2.