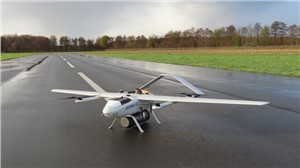 At the beginning of 2021 NLR initiated an ambitious project with a view to flying its HYDRA-2 drone using liquid hydrogen in a full composite tank by the end of 2022. As the end of this year approaches, the NLR project team looks back at the challenges faced and celebrates its achievements.

Many initiatives are ongoing in relation to the implementation of hydrogen – in its gaseous and liquid forms – as energy source for aviation, both in the Netherlands and worldwide. In 2019, NLR flew its HYDRA-1 drone with hydrogen gas as its energy source. Several developments followed and, as first attempt in the Netherlands, NLR wants to integrate all different aspects and challenges related to the usage of liquid hydrogen: from propulsion systems to the infrastructures needed, by redesigning key structural components such as the tanks. This mirrors NLR’s multidisciplinary strengths.

The NLR project team kicked off at the beginning of 2021. “The project started as a small exercise, conducted internally at NLR with a limited budget”, clarifies Bert Thuis, Head of the Department of Structures and Technologies and project leader. “Nonetheless, the results obtained in the first year reflect the knowledge, expertise and dedication of the team. The real values behind NLR.”

Dealing with liquid hydrogen
The first step was to look into the practical implications of having hydrogen on the NLR premises. Hosam Ebrahim is responsible for developing the new liquid hydrogen ground infrastructures at NLR. “The main challenge faced was finding advice on the implementation of the infrastructure safely and in accordance with national laws”, Hosam explains. Currently, not many national laws are in place regarding the storage and facilitation of small amounts of liquid hydrogen. Therefore, the process appeared to be straightforward. In actual fact, understanding the requirements for storing and distributing small amounts of liquid hydrogen resulted in an intertwined net of safety, regulatory and technical obstacles which needed to be overcome. Hosam and the team are just waiting for the last permit to start building the infrastructures at the NLR site in Noordoostpolder, which should be issued very soon.

Once the liquid hydrogen is available and ready to be fuelled in vehicles, the next essential step is to design the system on the drone for transforming the liquid hydrogen into electricity in the fuel cells known as hydrogen conditioning system. This comprises a boil-off heater, a 3D metal printed heat exchanger and a pressure regulator. All this allows the fuel cells to transform the energy into a useful form.

According to Roel van Benthem, senior R&D engineer and expert in hydrogen systems: “NLR had acquired experience with hydrogen in its gaseous form for the HYDRA-1 and 2 drones. But dealing with liquid hydrogen brings a new set of challenges. Nevertheless, this year the design of the system was completed and testing is underway.”

Since project inception, a decision was made to design a full composite tank to remove structural issues, such as fatigue, which would affect the implementation in a commercial aviation application of a standard metal tank or even of a commercial composite tank (which includes metal liners). However, given the level of complexity and novelty of the systems, an intermediate step to test the systems with a metal cryotank was decided upon. The requirements for a cryogenic metal (aluminium) tank for liquid hydrogen were identified, and the tank was then acquired by a Dutch manufacturer, Cryoworld BV.

Once those requirements had been pinpointed, it was essential to convert them into corresponding requirements for a composite tank, with no metal liner, to avoid structural fatigue issues. In parallel, research on the exact composite material was carried out. In particular, micro-cracking of the material was a point of concern, as such small cracks could lead to leakages and potential fire hazards. Material testing was performed to identify the minimum properties of the laminate.

Collaboration towards the one goal
The project team was also fully aware that achieving such an ambitious goal could not be done in complete isolation. Therefore, NLR reached out to its network in the Netherlands and in Europe, seeking collaboration. Students were engaged from the University of Twente and from the Technical University of Delft, including the expertise of the AeroDelft team. Specifically, their focus was on the structural and thermal design of the tank and on the material properties of a composite material able to withstand the extreme pressure and temperature conditions required for the storage of liquid hydrogen.

Besides engaging the cooperation of universities, NLR also seeks to involve industrial partners, to ensure swifter implementation of the research in the real world. Opportunities arise in connection with funding opportunities made available by the Dutch government correlated to the post-COVID 19 pandemic recovery: the Growth Funds (Groeifonds) and the Mobility Funds (Mobiliteitsfonds) for which for instance NLR will participate in a consortium led by Toray Advanced Composites, in a cross-sector research for the development of a long-life, fully composite liquid hydrogen tank for civil aviation.

From the outset, the project team at NLR was aware that the timeline set was going to be incredibly challenging, even in the best-case scenario. With two fuel cells on board, the HYDRA-2 needed to be optimised with respect to air flow and cooling. In addition, the autopilot needed to be tuned. And with every research project, especially where flying is involved, come risks, as in the case of the unfortunate landing of the HYDRA-2, which caused some delay. Nevertheless, a HYDRA-2 test flight with a larger compressed hydrogen tank and two fuel cells is still scheduled for the end of 2021 provided that the weather conditions are not too bad.

From a positive perspective, the experience gained with the two drones – the HYDRA-1 and 2 – will be applied for another even bigger drone that is currently being developed as a test platform for medical transports. This drone is being considered to perform flight tests with the composite liquid hydrogen tank on board.
As described by Bert Thuis: “The new project for the bigger drone perfectly matches the goals of the upcoming NLR strategy, which will commence in January 2022. Not only as a contribution to climate-neutral aviation, but also to a more enhanced multi-disciplinary approach to projects”. Building knowledge on drones can be seen as an essential building block towards the ambitious goal of NLR: flying its Pipistrel on liquid hydrogen by 2025.

Aside from the technical aspects involved in this project, Roel mentions a more intrinsic motivation for the project: “No time should be wasted to counteract climate change. Ambitious programs such as these pave the way for introducing hydrogen in aircraft, defining new future standards for sustainable aviation and preparing the NLR industry in the development of new sustainable aircraft components and systems”.