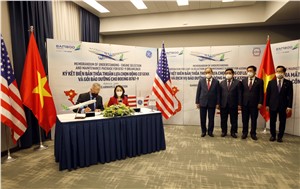 Bamboo Airways signed a Memorandum of Understanding (MOU) agreement with GE Aviation to purchase GEnx engines for its Boeing 787-9 aircraft order of 10 firm and 20 options valued at close to $2 billion (USD) list price.

The signing ceremony took place on September 21 in New York, USA, under the witness of Vietnam President Nguyen Xuan Phuc.

The MOU agreement is the largest deal in this signing series for Bamboo Airways. According to the agreement, GEnx engines to be delivered in 2022 will power the wide-body Boeing 787-9 Dreamliner fleet of Bamboo Airways. This fleet will operate on nonstop routes between Vietnam and the US, and the Boeing 787-9 is currently one of the few modern wide-body aircraft capable of fulfilling the requirements of long-distance international routes like this 13-hour flight between the two countries.

The GEnx is a high-thrust jet engine developed for the Boeing 787 Dreamliner and 747-8 aircraft. It has the advantage of low fuel consumption and reduced CO2 emissions up to 15% compared to the GE’s CF6 engine. Representing a giant leap forward in propulsion technology, GEnx uses lightweight durable materials and advanced design processes to reduce weight, improve performance, and lower maintenance, making it the best engine choice for many long-haul flights.

“GE is a large and prestigious corporation in engine manufacturing in the world. The selection of the GEnx engines for our Boeing 787-9 aircraft will help increase the operational efficiency and service quality of Bamboo Airways on Vietnam-US nonstop flights as well as many potential international routes,” said Dang Tat Thang, CEO of Bamboo Airways. “Besides consolidating and expanding the airline's modern fleet, the signing of this agreement with GE will lay a solid foundation to promote the development of this important route in the future.”

“GE is honored to be a strategic partner to Bamboo Airways,” says Dave Kircher, GEnx General Manager at GE Aviation. “The GEnx engines have proven performance with almost of decade of flying, and Bamboo Airways will fulfill its vision for long international routes thanks to the flying power and fuel efficiencies that the GEnx engine provides.”