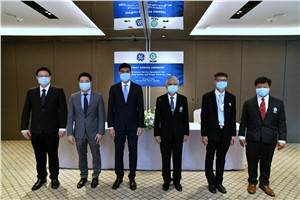 GE (NYSE: GE) today announced a new contract from District Cooling System and Power Plant Co., Ltd (DCAP), the biggest district cooling plant in Thailand, for services support for two existing GE LM6000PD aeroderivative gas turbines that provide power and chilled water to Bangkok’s Suvarnabhumi International airport. The service agreement will help DCAP improve performance efficiency of the 110 megawatt plant, assure stability and reliability of the international airport’s power production and cooling system, while reducing overall cost of ownership to the 110 megawatt plant.  As the OEM of the gas turbine, GE aims to bring improved availability and performance to the plant while performing all of the plant’s major maintenance needs over the next five years.

“At DCAP, we are committed to ensuring a steady supply of electricity to the nation’s international Suvarnabhumi Airport, Thailand’s leading transportation hub that accommodates about 64 million passengers and 1.3 million tons of cargo a year” says Mr.Suthep Ruangpornwisuth, Director Acting General Manager “Being the OEM provider for our current fleet, we selected GE as the service provider to help us increase the full potential of our plant assets. We know that GE has a proven track record of providing high-quality technology and services, and with this service agreement, we trust in the company's technical expertise and its regional capabilities in engineering and technical support."

“This project builds on our strong relationship with DCAP which dates back to when GE first supplied its Frame 5 gas turbines when the facility began operations in 2004” said Mr. Rachata Sankhavanija, Regional General Manager Commercial Asia Pacific. “The plant today, has been powered by two GE LM6000PD aeroderivative gas turbines since November 2011 and March 2012, and we are confident that DCAP will benefit from the improved reliability and in-region support that the GE team will provide under the service agreement for the district power plant.

Thailand is powered by a GE aeroderivative fleet of over 40 turbines. More than half of the units today, are under a contract service agreement with GE which positions the company currently as the No 1 service provider for GE aeroderivative technology in Thailand.