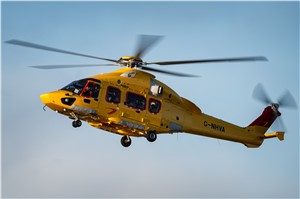 NHV Group is pleased to announce that its H175 fleet surpassed its first 40,000 flight hours. This significant milestone proves this super-medium-sized rotorcraft’s capabilities and reliability in highly demanding operations, especially the transportation of personnel and supplies to offshore oil and gas platforms. At present the worldwide H175 fleet has accumulated over 66,000 flight hours, of which NHV thus accounted for more than 60%.

The 40,000 hours have been accumulated by NHV’s fleet of thirteen H175s. NHV was the global launching customer of this platform, whose first two aircraft entered into service in December 2014. Initially operated from Den Helder, NHV gradually expanded its H175 operations to other bases in the North Sea and West Africa, where the aircraft has accumulated experience and gained maturity.

“Thanks to the collective dedication of our teams, who are putting the advanced capability of the H175 into practice every day while upholding the highest levels of safety, we have successfully positioned the H175 as the new standard for oil and gas missions. We continue to believe that the H175 is the best and most modern helicopter in its class today and are dedicated to further develop its strengths. We explicitly thank our valued customers, staff and suppliers for being our partners in reaching this new milestone”, says Thomas Hütsch, Chief Operating Officer of NHV Group.

“Airbus Helicopters’ and NHV’s technical teams are working closely together to further improve the maturity of the H175 platform. Technical enhancements as well as maintenance program evolutions will reduce maintenance and operating costs, enabling NHV and other operators to further increase the aircraft availability while performing operations in a good and safe way”, adds Mark Michiels, Group Maintenance Manager.

The H175 is designed to meet evolving mission needs in the oil and gas industry, offering outstanding performance and unmatched cost efficiency – with the capability of carrying a full payload to 90 percent of the North Sea’s offshore installations. It also is well tailored for search and rescue in support of such offshore operations, emergency medical services, public services, VIP and executive transport.