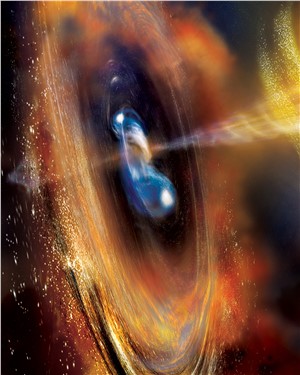 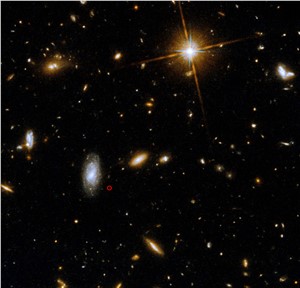 On Dec. 11, 2021, NASA’s Neil Gehrels Swift Observatory and Fermi Gamma-ray Space Telescope detected a blast of high-energy light from the outskirts of a galaxy around 1 billion light-years away. The event has rattled scientists’ understanding of gamma-ray bursts (GRBs), the most powerful events in the universe.

For the last few decades, astronomers have generally divided GRBs into two categories. Long bursts emit gamma rays for two seconds or more and originate from the formation of dense objects like black holes in the centers of massive collapsing stars. Short bursts emit gamma rays for less than two seconds and are caused by mergers of dense objects like neutron stars. Scientists sometimes observe short bursts with a following flare of visible and infrared light called a kilonova.

“This burst, named GRB 211211A, was paradigm-shifting as it is the first long-duration gamma-ray burst traced to a neutron star merger origin,” said Jillian Rastinejad, a graduate student at Northwestern University in Evanston, Illinois, who led one team that studied the burst. “The high-energy burst lasted about a minute, and our follow-up observations led to the identification of a kilonova. This discovery has deep implications for how the universe’s heavy elements came to be.”

A classic short gamma-ray burst begins with two orbiting neutron stars, the crushed remnants of massive stars that exploded as supernovae. As the stars circle ever closer, they strip neutron-rich material from each other. They also generate gravitational waves, or ripples in space-time – although none were detected from this event.

Eventually the neutron stars collide and merge, creating a cloud of hot debris emitting light across multiple wavelengths. Scientists hypothesize that jets of high-speed particles, launched by the merger, produce the initial gamma-ray flare before they collide with the wreckage. Heat generated by the radioactive decay of elements in the neutron-rich debris likely creates the kilonova’s visible and infrared light. This decay results in the production of heavy elements like gold and platinum.

“Many years ago, Neil Gehrels, an astrophysicist and Swift’s namesake, suggested that neutron star mergers could produce some long bursts,” said Eleonora Troja, an astrophysicist at the University of Rome who led another team that studied the burst. “The kilonova we observed is the proof that connects mergers to these long-duration events, forcing us to rethink how black holes are formed.”

Fermi and Swift detected the burst simultaneously, and Swift was able to rapidly identify its location in the constellation Boötes, enabling other facilities to quickly respond with follow-up observations. Their observations have provided the earliest look yet at the first stages of a kilonova.

Many research groups have delved into the observations collected by Swift, Fermi, the Hubble Space Telescope, and others. Some have suggested the burst’s oddities could be explained by the merger of a neutron star with another massive object, like a black hole. The event was also relatively nearby, by gamma-ray burst standards, which may have allowed telescopes to catch the kilonova’s fainter light. Perhaps some distant long bursts could also produce kilonovae, but we haven’t been able to see them.

“This is the first time we’ve seen such an excess of high-energy gamma rays in the afterglow of a merger event. Normally that emission decreases over time,” said Alessio Mei, a doctoral candidate at the Gran Sasso Science Institute in L’Aquila, Italy, who led a group that studied the data. “It’s possible these high-energy gamma rays come from collisions between visible light from the kilonova and electrons in particle jets. The jets could be weakening ones from the original explosion or new ones powered by the resulting black hole or magnetar.”

Scientists think neutron star mergers are a major source of the universe’s heavy elements. They based their estimates on the rate of short bursts thought to occur across the cosmos. Now they’ll need to factor long bursts into their calculations as well.

A team led by Benjamin Gompertz, an astrophysicist at the University of Birmingham in the United Kingdom, looked at the entire high-energy light curve, or the evolution of the event’s brightness over time. The scientists noted features that might provide a key for identifying similar incidents – long bursts from mergers – in the future, even ones that are dimmer or more distant. The more astronomers can find, the more they can refine their understanding of this new class of phenomena.

On Dec. 7, 2022, papers led by Rastinejad, Troja, and Mei were published in the scientific journal Nature, and a paper led by Gompertz was published in Nature Astronomy.

“This result underscores the importance of our missions working together and with others to provide multiwavelength follow up of these kinds of phenomenon,” said Regina Caputo, Swift project scientist, at NASA’s Goddard Space Flight Center in Greenbelt, Maryland. “Similar coordinated efforts have hinted that some supernovae might produce short bursts, but this event is the final nail in the coffin for the simple dichotomy we’ve used for years. You never know when you might find something surprising.”

Swift is a collaboration with Penn State, the Los Alamos National Laboratory in New Mexico, and Northrop Grumman Space Systems in Dulles, Virginia, with important contributions from partners in the United Kingdom and Italy.

Fermi is a collaboration with the U.S. Department of Energy, with important contributions from partners in France, Germany, Italy, Japan, Sweden, and the United States.

The Hubble Space Telescope is a project of international cooperation between NASA and ESA (European Space Agency). Goddard manages the telescope. The Space Telescope Science Institute (STScI) in Baltimore conducts science operations. STScI is operated for NASA by the Association of Universities for Research in Astronomy, in Washington, D.C.