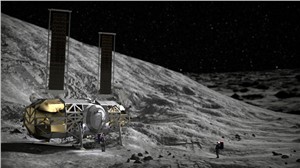 Dynetics, a wholly-owned subsidiary of Leidos, today announced it has submitted a bid on the Human Landing System (HLS) Sustaining Lunar Development (SLD) contract for NASA’s Artemis Mission. Northrop Grumman will join the Dynetics team in this pursuit.

“We’re excited to enter the competition to support NASA’s Sustaining Lunar Development efforts, adding Northrop Grumman to our team,” said Leidos Dynetics Group President Steve Cook. “As the only company to successfully build a crewed lunar lander, Northrop Grumman will be an excellent partner as we support NASA’s inspiring efforts to return humans to the lunar surface. We will leverage their expertise and legacy of human space exploration, including their ongoing contracts to build the Habitation and Logistics Outpost for NASA’s lunar Gateway and to provide commercial resupply services to the International Space Station, significantly bolstering our pursuit. We’re pleased they have joined us in this historic effort.”

For more than three years, the Dynetics team has been a prime contractor for HLS. It was one of 11 companies selected in 2019 under the Next Space Technologies for Exploration Partnership (NextSTEP-2) Appendix E contract. The Leidos subsidiary was then selected under NextSTEP-2 Appendix H in 2020, alongside SpaceX and Blue Origin.

In September 2021, Dynetics was one of five companies selected under Appendix N, which allows industry partners to collaborate with NASA to mature lander designs and conduct risk reduction activities in support of sustainable lander development. The recent SLD solicitation – also known as NextSTEP-2 Appendix P – was released on September 16, 2022.

Northrop Grumman has also been a primary supporter of HLS, winning prime contracts under Appendices E and N.

“Our capabilities and experience in pioneering human exploration and space logistics will help provide a lunar transportation system that our nation can rely on for years to come,” said Steve Krein, Vice President, Civil and Commercial Space, Northrop Grumman.

“NASA is counting on industry to lead the development of returning astronauts to the moon,” Cook said. “We believe our partnership with Northrop Grumman makes us more than ready for the challenge. We look forward to the hard work ahead.”