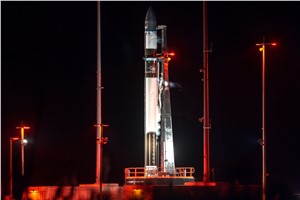 Rocket Lab USA, Inc. (Nasdaq: RKLB) (“Rocket Lab” or “the Company”), a leading launch and space systems company, today confirmed it has completed a final launch rehearsal and is ready for lift-off for its first mission from U.S. soil as early as December 7. The mission will take place from Rocket Lab Launch Complex 2 at Virginia Space’s Mid-Atlantic Regional Spaceport within NASA’s Wallops Flight Facility – a launch pad developed to support U.S. Electron missions for government and commercial customers.

Known as a Wet Dress Rehearsal, this pre-launch exercise sees the launch team carry out the same activities and procedures they will conduct on launch day to ensure the Electron rocket, launch pad, and supporting systems are ready for flight. As part of the rehearsal, Electron was rolled out to the launch pad and raised vertically before it was loaded with fuel and liquid oxygen to verify fuelling procedures. The launch team then conducted a full launch countdown, ending before the final step of engine ignition of Electron’s Rutherford engines. Electron was then detanked of fuel and returned to Rocket Lab’s Integration and Control Facility (ICF) at the Wallops Research Park to await launch during a window that extends from December 7 – 20.

The “Virginia Is For Launch Lovers” mission will deploy three satellites for radio frequency geospatial analytics provider HawkEye 360, with integration of those satellites to Electron taking place in the coming days at Rocket Lab’s ICF. Meanwhile, NASA is continuing to make progress in certifying its Autonomous Flight Termination System (AFTS) software required for the launch. This will be the first time an AFTS will be flown from the Mid-Atlantic Regional Spaceport, representing a valuable new capability for the nation.

While “Virginia Is For Launch Lovers” will be Electron’s first launch from the U.S., Rocket Lab has already conducted 32 Electron missions from Launch Complex 1 in New Zealand, delivering 152 satellites to orbit for customers including NASA, the National Reconnaissance Office, DARPA, the U.S. Space Force and a range of commercial constellation operators. Electron is already the most frequently launched small orbital rocket globally and now with the capacity of the pads at Launch Complex 1 and 2 combined, Rocket Lab has more than 130 Electron launch opportunities every year.

The “Virginia Is For Launch Lovers” mission will be the first of three Electron launches for HawkEye 360 in a contract that will see Rocket Lab deliver 15 satellites to low Earth orbit between late 2022 and 2024. These missions will grow HawkEye 360’s constellation of radio frequency monitoring satellites, enabling the company to better deliver precise geolocation of radio frequency emissions anywhere in the world.

“This mission is a significant moment for Rocket Lab and a pivotal milestone for Virginia’s long legacy in spaceflight,” said Rocket Lab CEO and founder, Peter Beck. “With wet dress rehearsal now complete, we’re excited to move into launch operations for this historic mission.”

“We are honored to support the launch of this historic mission”, said Ted Mercer, CEO and Executive Director of Virginia Space. “In addition to being Rocket Lab’s first and only U.S. launch location, we will also be building rockets and processing their payload right here in Accomack County – something that has never been done in Virginia. Our partnership with Rocket Lab is a unique opportunity for the Commonwealth of Virginia to create long-term economic development opportunities in the form of high-paying jobs, launch viewing tourism, and construction of new facilities on the Eastern Shore.”