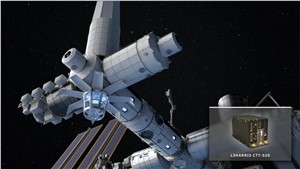 L3Harris Technologies (NYSE:LHX) will provide a critical communications radio to Axiom Space for its planned commercial space station. The S-band radio will mirror the functionality that exists on the International Space Station (ISS) for NASA’s Common Communications for Visiting Vehicles.

The L3Harris C/TT 520 S-band radio will serve as the common data link between Axiom’s space station called Axiom Station as well as it’s docking vehicles, enabling audio, video and telemetry data at varying data rates and communications ranges. L3Harris’ radios have performed this role on the ISS for visiting vehicles during all phases of rendezvous, docking and mated operations since 2018.

“Our tremendous record of flawless communication transmissions in the harshest environments is a testament of the dedication to our customers and their mission and makes the C/TT 520 the perfect choice for Axiom Station,” said Kristin Houston, President, Electro Optical, L3Harris.

Axiom Station is currently being constructed, with its first section planned for launch in late 2024 ahead of the ISS decommissioning in 2031.

Numerous NASA programs have relied on L3Harris’ expertise and technology – from early spacecraft through the Mercury, Gemini, Apollo, Space Shuttle, ISS and previous Mars missions. L3Harris has supported deep space exploration with work on the Hubble Space Telescope, and now the James Webb and Nancy Grace Roman space telescopes. In addition, the company supports space-based weather forecasting on U.S. and international satellites and has navigation technology on every U.S. GPS satellite.