This news is classified in: Aerospace Commercial Aircraft 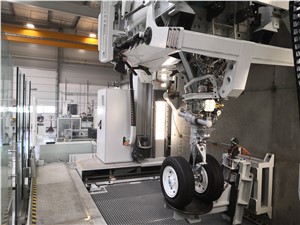 Nose wheel steering and extension/retraction actuators are currently powered by an aircraft’s hydraulic system via a complex and bulky network of pipes. By connecting to the aircraft’s electrical system, Safran Landing Systems’ new electro-hydrostatic actuators (EHA) will drive these functions using hydraulic power generated locally at the front of the aircraft by an electric motor-pump.

The new system offers a host of advantages for aircraft manufacturers and airlines. First, it retains the unrivaled actuation power of hydraulics while contributing to aircraft electrification, thereby optimizing power consumption. It also simplifies aircraft architecture and reduces weight. In addition, it’s a plug & play system to facilitate installation and accessibility for maintenance. Safran Landing Systems’ modular EHA system can also be adapted to planemakers’ varying needs, in terms of both aircraft architecture and system interfaces.

The steering and extension/retraction system tests were conducted on one of Safran Landing Systems’ new test rigs, developed through the DELTA electric nose gear demonstrator project. In particular, the extension/retraction function was tested on a platform combining cobotics (collaborative robotics) and data processing, using an integrated wheel bay and simulated flight conditions such as aerodynamic loads on the bay doors and landing gear plus extreme temperatures.

Walid Hamzeh, Executive Vice President, Strategic Development at Safran Landing Systems, said: “We are proud to offer the first electric nose landing gear system, which will enable our customers to reduce their operating and maintenance costs. It joins our roster of aircraft electrification systems, including of course our electric taxiing solution, which we continue to refine. These two systems clearly reflect Safran’s low-carbon commitments and ongoing R&D to support the emergence of carbon-neutral commercial aviation by 2050. And they are taking us one step closer to the aircraft of the future.”

The “e-taxi” system being developed by Safran Landing Systems will drastically reduce emissions from airplane ground movements – by 61% for CO2 and 51% for oxides of nitrogen (NOx) – while also cutting fuel consumption per flight by up to 4%.