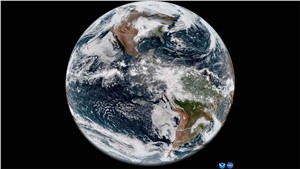 The GOES-18 full disk GeoColor image was captured May 5, 2022. This type of imagery combines data from multiple ABI channels to approximate what the human eye would see from space.

The ABI is the primary instrument for NOAA’s Geostationary Operational Environmental Satellite-18 (GOES-18) — the third in a series of four advanced geostationary weather satellites. In addition to the ABI, the L3Harris-developed enterprise ground system downlinks and processes the imagery, controls the weather satellite constellation and its suite of instruments.

Providing high-resolution imagery of weather and environmental systems using 16 spectral bands, the ABI onboard GOES-18 will keep watch over the western contiguous U.S., Hawaii, Alaska, Mexico, Central America and the Pacific against devastating tornadoes, wildfires, dense fog, and other Pacific Ocean-based storms, such as cyclones and hurricanes.

“L3Harris' third Advanced Baseline Imager continues to aid NOAA and the National Weather Service in detecting and monitoring of severe storms, wildfires, and tornadoes, which enable more accurate warnings and severe weather forecasts,” said Rob Mitrevski, Vice President and General Manager, Spectral Solutions, Space and Airborne Systems, L3Harris. “The technology onboard GOES-18 will allow advanced severe weather information to be received every 30 seconds. We look forward to seeing this satellite transition to full operational capability in the coming months where it can continue our company’s legacy of real-time monitoring to save the lives and property of our nation’s citizens.”

GOES-18 was called GOES-T prior to reaching geostationary orbit on March 14, and is slated to become GOES-West when fully operational. In addition to the third ABI for GOES-18, L3Harris delivered its fourth ABI to NASA in late 2021. This advanced instrument was integrated into the GOES-U satellite, slated to launch in 2024, which will complete the GOES-R series of advanced geostationary weather sensors, creating a worldwide constellation of seven Advanced Baseline Imager class geostationary instruments – four for NOAA, two for Japan, and one for South Korea. L3Harris is also currently completing imager and sounder concept designs for NOAA’s next-generation geostationary satellite mission - Geostationary Extended Observations (GeoXO).