Rocket Lab to Attempt 1st Mid-Air Helicopter Capture of the 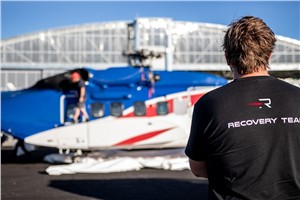 Rocket Lab USA, Inc (Nasdaq: RKLB) (“Rocket Lab”), a leading launch and space systems company, has announced today that during its next Electron launch, a commercial rideshare mission currently scheduled in April 2022, the company will attempt a mid-air helicopter capture of the Electron launch vehicle for the first time.

The “There and Back Again” mission, Rocket Lab’s 26th Electron launch, will lift off from Pad A at Launch Complex 1 on New Zealand’s Mahia Peninsula within a 14-day launch window scheduled to commence on April 19, 2022 UTC. Electron will deploy 34 payloads from commercial operators Alba Orbital, Astrix Astronautics, Aurora Propulsion Technologies, E-Space, Unseenlabs, and Swarm Technologies via global launch services provider Spaceflight Inc. The launch is expected to bring the total number of satellites launched by Electron to 146.

For the first time, Rocket Lab will also attempt a mid-air capture of Electron’s first stage as it returns from space after launch, the next major step in the Company’s development program to make Electron a reusable rocket. Rocket Lab will be attempting the catch with a customized Sikorsky S-92, a large twin engine helicopter typically used in offshore oil & gas transport and search and rescue operations.

Catching a returning rocket stage mid-air as it returns from space is a highly complex operation that demands extreme precision. Several critical milestones must align perfectly to ensure a successful capture.

“We’re excited to enter this next phase of the Electron recovery program,” said Rocket Lab founder and CEO, Peter Beck. “We’ve conducted many successful helicopter captures with replica stages, carried out extensive parachute tests, and successfully recovered Electron’s first stage from the ocean during our 16th, 20th, and 22nd missions. Now it’s time to put it all together for the first time and pluck Electron from the skies. Trying to catch a rocket as it falls back to Earth is no easy feat, we’re absolutely threading the needle here, but pushing the limits with such complex operations is in our DNA. We expect to learn a tremendous amount from the mission as we work toward the ultimate goal of making Electron the first reusable orbital small sat launcher and providing our customers with even more launch availability.”

Rocket Lab has previously conducted three successful ocean recovery missions where Electron returned to Earth under parachute and was recovered from the ocean. Analysis of those missions informed design modifications to Electron, enabling it to withstand the hard re-entry environment, and also helped to developed procedures for an eventual helicopter capture.

Payloads aboard the “There and Back Again” mission include:
Alba Orbital: A cluster of four pico-satellites will be deployed, including Alba Orbital’s own Unicorn-2 PocketQube satellites, as well as TRSI-2, TRSI-3, and MyRadar-1 satellites for Alba Orbital’s customers. Each small satellite carries a unique sensor designed to demonstrate innovative technologies on orbit. Unicorn-2 will be carrying an optical night-time imaging payload designed to monitor light pollution across the globe.

Astrix Astronautics: Astrix Astronautics is deploying the “Copia” system - a high-performance power generation system for CubeSats that aims to improve on power restraints typically seen in small satellites. The mission aims to demonstrate the high performance of Copia's novel design via -on-orbit testing with 1U solar arrays able to capture up to 200W.

Aurora Propulsion Technologies: The AuroraSat-1 also known as The Flying Object will deploy to low Earth orbit in a demonstration of the company’s proprietary propulsion devices and plasma brakes that provide efficient propulsion and deorbiting capabilities for small satellites. The CubeSat will validate the water-based propellant and mobility control of its Resistojets that can assist CubeSats with detumbling capabilities and propulsion-based attitude control. AuroraSat-1 will also test its deployable Plasma Brakes which combine a micro-tether with charged particles in space, or ionospheric plasma, to generate significant amounts of drag to deorbit the spacecraft safely at the end of its life.

E-Space: E-Space’s payload will consist of three demonstration satellites to validate the systems and technology for its sustainable satellite system. The satellites have small cross-sections, to decrease the risk of collision from the millions of untrackable space objects and will automatically de-orbit if any systems malfunction. Eventually, the satellites will sacrificially capture and deorbit small debris to burn up on re-entry, setting a new standard in space environmental management.

UNSEENLABS: BRO-6 is the sixth satellite of the Unseenlabs’ constellation, dedicated to the detection of radiofrequency signals. Thanks to its technology, the French company detects any vessel at sea, even those whose cooperative beacon is turned off. The launch of BRO-6 satellite will allow Unseenlabs to improve its revisit time and deliver more customers.

Tell a friend:
Rocket Lab to Attempt 1st Mid-Air Helicopter Capture of the Electron Rocket During Next Mission