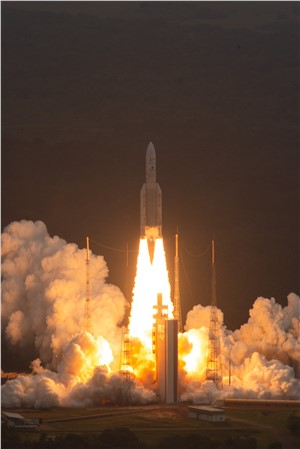 After a successful launch of the NASA/ESA/CSA James Webb Space Telescope on 25 December, and completion of two mid-course correction manoeuvres, the Webb team has analysed its initial trajectory and determined the observatory should have enough propellant to allow support of science operations in orbit for significantly more than a 10-year lifetime (the minimum baseline for the mission is five years).

Webb’s precise launch on an ESA-provided Ariane 5 rocket was performed by Arianespace on behalf of ESA from Europe’s Spaceport in French Guiana.

The analysis shows that less propellant than originally planned is needed to correct Webb’s  trajectory toward its final orbit around the second Lagrange point known as L2, a point of gravitational balance on the far side of Earth away from the Sun. Consequently, Webb will have much more than the baseline estimate of propellant – though many factors could ultimately affect Webb’s duration of operation.

Webb has rocket propellant on board not only for midcourse correction and insertion into orbit around L2, but also for three necessary functions during the life of the mission: ‘station-keeping’ manoeuvres – small thruster burns to adjust Webb's orbit; pointing the telescope toward science targets; and what’s known as momentum management, which maintains Webb’s orientation in space.

The extra propellant is largely due to the precision of the Arianespace Ariane 5 launch, which exceeded the requirements needed to put Webb on the right path, as well as the precision of the first mid-course correction manoeuvre – a relatively small, 65-minute burn after launch that added approximately 20 m/s to the observatory’s speed. A second correction manoeuvre occurred on 27 December, adding around 2.8 m/s to the speed.

The accuracy of the launch trajectory had another result: the timing of the solar array deployment. That deployment was executed automatically after separation from the Ariane 5 based on a stored command to deploy either when Webb reached a certain attitude toward the Sun, ideal for capturing sunlight to power the observatory, or automatically at 33 minutes after launch. Because Webb was already in the correct attitude after separation from the Ariane second stage, the solar array was able to deploy about a minute and a half after separation, approximately 29 minutes after launch.

From here on, all deployments are human-controlled so deployment timing – or even their order -- may change.

Webb is the largest, most powerful telescope ever launched into space. As part of an international collaboration agreement, ESA has provided the telescope’s launch service using the Ariane 5 launch vehicle. Working with partners, ESA was responsible for the development and qualification of Ariane 5 adaptations for the Webb mission and for the procurement of the launch service by Arianespace.