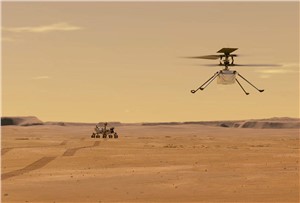 NASA’s Perseverance rover has been busy since its harrowing touchdown in Mars’ Jezero Crater this past February.

In the 10 months since, the car-size rover has driven 1.8 miles (2.9 kilometers), set a record for the longest rover drive in a Martian day, taken more than 100,000 images, and collected six samples of Martian rock and atmosphere that could eventually be brought to Earth for further study.

And then there’s NASA’s Ingenuity Mars Helicopter, which hitched a ride to the Red Planet with Perseverance: Proving that powered, controlled flight is possible in Mars’ thin atmosphere, the 4-pound (1.8-kilogram) rotorcraft has logged 18 flights and counting.

In a new video, Jessica Samuels – the Perseverance surface operations mission manager at NASA’s Jet Propulsion Laboratory in Southern California – looks back on a year filled with groundbreaking discoveries. She also explains the next phase of Perseverance’s mission: to explore the delta that formed in Jezero Crater billions of years ago from sediment that an ancient river carried into the lake that once existed in the crater.

“It feels great to be a part of making history and enabling the start of a Mars Sample Return campaign,” said Samuels. “What motivates us as engineers and scientists exploring another planet is the opportunity to learn more.”