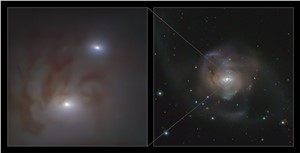 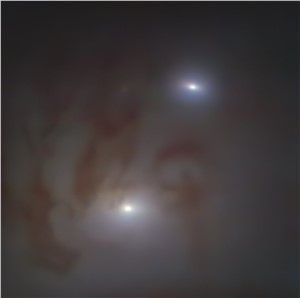 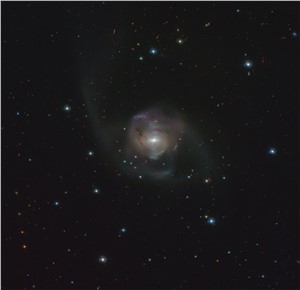 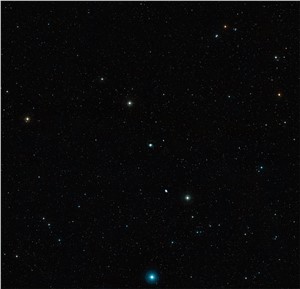 “The small separation and velocity of the two black holes indicate that they will merge into one monster black hole, probably within the next 250 million years,” adds co-author Holger Baumgardt, a professor at the University of Queensland, Australia. The merging of black holes like these could explain how the most massive black holes in the Universe come to be.

Voggel and her team were able to determine the masses of the two objects by looking at how the gravitational pull of the black holes influences the motion of the stars around them. The bigger black hole, located right at the core of NGC 7727, was found to have a mass almost 154 million times that of the Sun, while its companion is 6.3 million solar masses.

It is the first time the masses have been measured in this way for a supermassive black hole pair. This feat was made possible thanks to the close proximity of the system to Earth and the detailed observations the team obtained at the Paranal Observatory in Chile using the Multi-Unit Spectroscopic Explorer (MUSE) on ESO’s VLT, an instrument Voggel learnt to work with during her time as a student at ESO. Measuring the masses with MUSE, and using additional data from the NASA/ESA Hubble Space Telescope, allowed the team to confirm that the objects in NGC 7727 were indeed supermassive black holes.

Astronomers suspected that the galaxy hosted the two black holes, but they had not been able to confirm their presence until now since we do not see large amounts of high-energy radiation coming from their immediate surroundings, which would otherwise give them away. “Our finding implies that there might be many more of these relics of galaxy mergers out there and they may contain many hidden massive black holes that still wait to be found,” says Voggel. “It could increase the total number of supermassive black holes known in the local Universe by 30 percent.”

The search for similarly hidden supermassive black hole pairs is expected to make a great leap forward with ESO’s Extremely Large Telescope (ELT), set to start operating later this decade in Chile’s Atacama Desert. “This detection of a supermassive black hole pair is just the beginning,” says co-author Steffen Mieske, an astronomer at ESO in Chile and Head of ESO Paranal Science Operations. “With the HARMONI instrument on the ELT we will be able to make detections like this considerably further than currently possible. ESO’s ELT will be integral to understanding these objects.”