VS26 Mission: Arianespace at the Service of European Satellite Navigation With Galileo 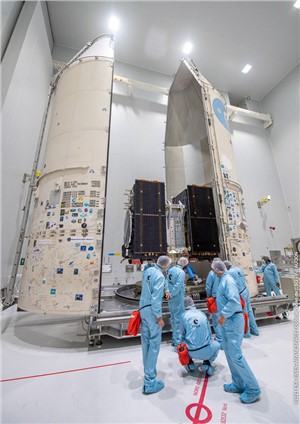 On Tuesday 1st December 2021, Arianespace, the European launch service company, will operate Soyuz flight VS26 from the Guiana Space Center, Europe’s spaceport. Two more Galileo satellites, Galileo FOC 23-24, will be orbited on this flight performed for the benefit of the European Space Agency (ESA) acting on behalf of the European Commission.

Out of 26 Galileo satellites already in orbit, 14 have been launched by Soyuz (produced by Progress Space Rocket Center, part of Roscosmos) between 2011 and 2016; and 12 by Ariane 5 between 2016 and 2018. VS26 will raise Galileo’s total fleet to 28 satellites, before Soyuz and Ariane 62 will then orbit six additional Galileo FOC satellites. The target for a full deployment of Galileo’s first generation is around 2025.

Being the largest European Union (EU) infrastructure initiative, Galileo is bringing strategic autonomy and sovereignty to the EU citizens and its Member States. Funded and fully owned by the European Union and designed by ESA, it features innovative technologies developed by European industry for the benefit of all citizens.

The Galileo satellites are built by prime contractor OHB System, with the payloads supplied by Surrey Satellite Technology Ltd (SSTL), an Airbus Defence and Space subsidiary.

The Soyuz launch vehicle family has provided reliable and efficient launch services since the start of space exploration. With the introduction of the launcher at Guiana Space Center (CSG), Soyuz is now an integral part of the European launcher fleet, together with the heavy-lift Ariane 5 and the lightweight Vega.

Tell a friend:
VS26 Mission: Arianespace at the Service of European Satellite Navigation With Galileo