Firefly Aerospace is One Step Closer to Landing on the Moon

Firefly Aerospace is One Step Closer to Landing on the Moon 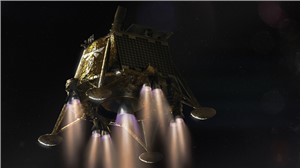 Firefly Aerospace, Inc., a leader in economical launch vehicles, spacecraft, and in-space services, today announced it reached a major milestone with the successful completion of the Critical Design Review (CDR) of their Blue Ghost lunar lander. This CDR paves the way for construction of the Blue Ghost lander, which is scheduled to touch down in the Mare Crisium lunar basin in September of 2023 carrying ten NASA payloads as part of the $93.3-million Commercial Lunar Payload Services (CLPS) contract secured by Firefly earlier this year. The lander will also take several commercial payloads to the lunar surface. The 2023 Blue Ghost mission will be the first of what are expected to be yearly lunar surface missions for Firefly.

“This milestone marks another step in an aggressive schedule and meeting it continues to showcase our spacecraft team’s ability to consistently deliver incredible work,” stated Dr. Tom Markusic, Firefly’s CEO. “This mission is a forerunner of what we see as a growing cadence of recurring data and payload service missions in cis-lunar space that will kickstart a lunar economy, and we’re honored to be demonstrating our ability to deliver these services for NASA and for our commercial customers.”

Blue Ghost will operate a variety of payloads through lunar transit and orbit, as well as while on the lunar surface. These payloads will explore the region’s regolith properties, geophysical characteristics, and interaction of the solar wind and the Earth’s magnetic field. There are also several key technology demonstrations related to navigation and sample collection.

“The Firefly team is greatly humbled by the confidence external reviewers have shown in our lander and mission plan, in addition to the sign-off on this milestone completion by NASA. Our team has steadfastly driven to remain on schedule while producing the best product and plan in the face of both a global pandemic and the associated supply chain challenges,” said Dr. William Coogan, Blue Ghost Chief Engineer. “Every day I have the pleasure of working with some of the most creative people in the industry, who believe in the importance of this mission and who work together to make it a reality.”

Mare Crisium has been the subject of previous lunar missions including the Soviet landers Luna 15, Luna 23, and Luna 24. In 2012, the NASA GRAIL mission confirmed and mapped a mass-concentration at the center of the basin.

Tell a friend:
Firefly Aerospace is One Step Closer to Landing on the Moon