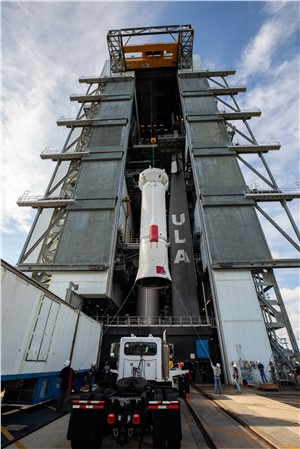 NASA has tested the functions of Lucy, the agency’s first spacecraft to study Jupiter’s Trojan asteroids, filled it with fuel, and is preparing to pack it into a capsule for launch Saturday, Oct. 16.

Named after characters in Greek mythology, these asteroids circle the Sun in two swarms, with one group leading ahead of Jupiter in its path, the other trailing behind it. Lucy will be the first spacecraft to visit these asteroids. By studying these asteroids up close, scientists hope to hone their theories on how our solar system’s planets formed 4.5 billion years ago and why they ended up in their current configuration.

“With Lucy, we’re going to eight never-before-seen asteroids in 12 years with a single spacecraft,” said Tom Statler, Lucy project scientist at NASA Headquarters in Washington. “This is a fantastic opportunity for discovery as we probe into our solar system’s distant past.”

Following all pandemic protocols, Lucy team members have spent the past eight weeks at NASA’s Kennedy Space Center in Florida, preparing the spacecraft for flight. Engineers have tested the spacecraft’s mechanical, electrical, and thermal systems and practiced executing the launch sequence from the mission operations centers at Kennedy and Lockheed Martin Space in Littleton, Colorado. In early August, engineers installed the spacecraft’s high-gain antenna, its second most prominent feature after the expansive solar arrays, which will allow the spacecraft to communicate with Earth.

“There has been a lot of hands-on work,” said Donya Douglas-Bradshaw, Lucy project manager at NASA’s Goddard Space Flight Center in Greenbelt, Maryland. “This summer has gone by so fast; it’s hard to believe we’re nearly at launch.”

On Sept. 18, propulsion engineers finished filling Lucy’s fuel tanks with approximately 1,600 pounds (725 kilograms) of liquid hydrazine and liquid oxygen, which make up 40% of the mass of the spacecraft. The fuel will be used for precise maneuvers that will propel Lucy to its asteroid destinations on schedule, while the solar arrays – each the width of a school bus – will recharge the batteries that will power spacecraft instruments.

The Lucy spacecraft will soon be packed into the two halves of the launch vehicle fairing, which will close around it like a clamshell. After the spacecraft is encapsulated, the Lucy team will be able to communicate with it electrically through an “umbilical cord.”

“Launching a spacecraft is almost like sending a child off to college – you’ve done what can for them to get them ready for that next big step on their own,” said Hal Levison, the principal investigator of the Lucy mission, based at the Southwest Research Institute in Boulder, Colorado.

In early October, the encapsulated spacecraft will be transported to the Vehicle Integration Facility at the Cape Canaveral Space Force Station, where it will be “mated” with the United Launch Alliance Atlas V 401 rocket. The Atlas V will lift off from Space Launch Complex 41.The rocket will carry Lucy outside Earth’s atmosphere to begin the long journey to the Trojan asteroids.

A few days prior to launch, engineers will power up the Lucy spacecraft in preparation for the mission. This process will take about 20 minutes.

“The spacecraft will sit in launch configuration and the engineering team will continuously monitor its health and status to make sure Lucy is ready to go,” said Jessica Lounsbury, the Lucy project systems engineer at Goddard. “And then it’s launch day.”

Lucy’s first launch attempt is scheduled for 5:34 a.m. EDT on Oct. 16. That day, the team will be “called to stations” at 1 a.m., which is when everyone is expected to arrive at mission control and other stations to monitor the spacecraft and run through the full launch countdown procedures. If weather or any other issues prohibit a launch that day, the team will have additional launch opportunities beginning the following day.