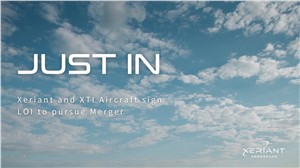 Xeriant, Inc. (“Xeriant”), an aerospace company dedicated to Advanced Air Mobility, and XTI Aircraft Company (“XTI”), an OEM and developer of the TriFan 600, a leading next-generation hybrid-electric VTOL aircraft, announced today that they have executed a Letter of Intent (the “LOI”) to pursue a merger whereby Xeriant would acquire 100% of the issued and outstanding shares of XTI. The LOI provides for the parties to negotiate and enter into a definitive merger agreement by October 22, 2021.

Xeriant has retained Maxim Group LLC as its financial advisor to assist the Company in its endeavors, including its pursuit of an uplisting of Xeriant’s common stock to a national exchange.

Xeriant and XTI intend to announce the definitive terms of the merger agreement once finalized and will continue to work through their previously announced joint venture while negotiations are in process.

Based in Englewood, Colorado, XTI Aircraft Company is a privately owned OEM and developer of next-generation, cleantech VTOL aircraft, including the TriFan 600. The TriFan 600 is designed to be the fastest, longest-range vertical takeoff and landing (VTOL) hybrid-electric aircraft in the world and the first commercial fixed-wing VTOL airplane, with pre-orders exceeding $1.3 billion in gross revenues upon delivery of those aircraft. XTI’s management team is led by the former CEO of AgustaWestland North America, the former President of Cessna Aircraft and the former CEO of AVX Aircraft who, combined, have successfully developed and certified over 40 new aircraft designs for launch in the worldwide aviation market.

Xeriant, Inc. (d.b.a. Xeriant Aerospace) is an aerospace company dedicated to the emerging aviation market called Advanced Air Mobility (AAM), the transition to eco-friendly on-demand flight, and is partnering with and acquiring strategic interests in visionary companies that accelerate this mission. Xeriant is focused on the development and deployment of next-generation electrically powered aircraft capable of vertical takeoff and landing (VTOL), breakthrough technologies and advanced materials which can be successfully integrated and commercialized, and the critical infrastructure components needed to support operations. Xeriant is located at the Research Park at Florida Atlantic University in Boca Raton, Florida adjacent to the Boca Raton Airport.

In connection with the safe harbor provisions of the Private Securities Litigation Reform Act of 1995, Xeriant, Inc. is hereby providing cautionary statements identifying important factors that could cause our actual results to differ materially from those projected in forward-looking statements (as defined in such act). Any statements that are not historical facts and that express, or involve discussions as to, expectations, beliefs, plans, objectives, assumptions or future events or performance (often, but not always, indicated through the use of words or phrases such as “will likely result,” “are expected to,” “will continue,” “is anticipated,” “estimated,” “intends,” “plans,” “believes” and “projects”) may be forward-looking and may involve estimates and uncertainties which could cause actual results to differ materially from those expressed in the forward-looking statements. These statements include, but are not limited to, our expectations concerning our ability to attract investors.