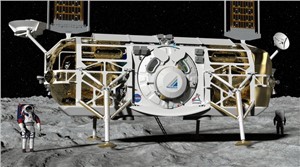 Dynetics, a wholly owned subsidiary of Leidos, has been selected to help NASA enable a steady pace of crewed trips to the Moon's surface as part of the Artemis program's Next Space Technologies for Exploration Partnerships (NextSTEP-2) Appendix N.

As one of five companies selected for a firm fixed-price, milestone-based contract, Dynetics will receive an initial award of $40.8 million over the next 15 months to make advancements toward sustainable human landing system (HLS) concepts. Dynetics will also conduct risk-reduction activities and provide feedback on NASA's requirements to cultivate industry capabilities for crewed lunar landing missions.

"Dynetics is ready to continue working closely with NASA on a sustainable lander solution," said Robert Wright, Dynetics Space Systems Division Manager. "We believe our approach to collaborating and tailoring NASA's lander design is critical to the long-term success of America's journey to the Moon and we are honored to be part of this mission."

Previously, Dynetics was one of three prime contractors selected under NextSTEP-2 Appendix H to design HLS in April of 2020. Since the developmental stage, Dynetics' lunar lander technology has contributed to the sustainability of the Artemis program in three main ways: reusability, extensibility and supporting the development of a lunar economy. The design enables a long-term presence on the Moon that will stimulate a cislunar economy.