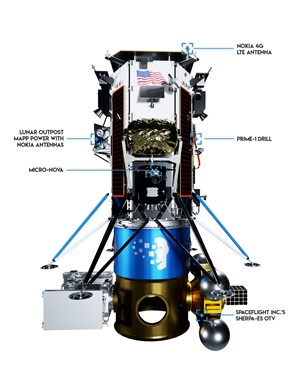 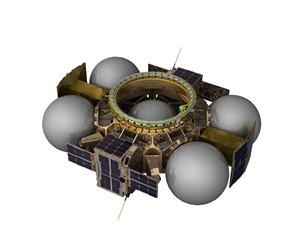 Spaceflight Inc., the leader in global launch services, today announced a breakthrough cislunar rideshare mission: “GEO Pathfinder.” As a secondary payload on board Intuitive Machines’ IM-2 South Pole Mission, Spaceflight will execute rideshare deployments in trans-lunar orbit, low-lunar orbit and beyond to geosynchronous equatorial orbit (GEO). Spaceflight will utilize a lunar flyby with its new propulsive transfer vehicle, Sherpa EScape (Sherpa-ES), to deliver a payload from GeoJump, a new company dedicated to providing smallsat rideshare opportunities to GEO, that will also contain an Orbit Fab in-space fueling payload. The mission is slated to launch on a SpaceX Falcon 9 no earlier than Q4 2022.

Spaceflight’s rideshare missions allow customers to quickly access lunar orbits affordably. Additionally, by leveraging Spaceflight’s propulsive Sherpa orbital transfer vehicles (OTVs), customers can reach farther destinations in the solar system as well as optimize their spacecraft for the mission without the complexities associated with carrying extra propellant and mass to do the orbit raising themselves.

“This mission will demonstrate our complete mission toolbox and ability to execute complex, groundbreaking and exciting missions beyond LEO,” said Grant Bonin, SVP of business development at Spaceflight. “Spaceflight will utilize a launch with a creative trajectory and our best-in-class propulsion system to slingshot around the Moon, allowing us to deliver payloads to GEO in an environmentally safe manner. We’re pleased to take Orbit Fab on this pathfinder mission and leverage the secondary payload capacity from Intuitive Machines. Spaceflight is committed to being the leading space transportation provider for Earth orbit and beyond, and this is an unprecedented example of delivering on that vision.”

The IM-2 South Pole Mission, which will take the Nova-C class lander with 130 kilograms of payloads to the lunar surface, will also carry Spaceflight’s newest propulsive OTV, Sherpa-ES, which is the higher energy variant of the Sherpa-NG product line. Sherpa-ES is a bipropellant, high delta-V OTV that will enable small satellite delivery anywhere in cislunar space, including injection to trans- and low-Lunar orbits and GEO. It leverages the same modular structure of the Sherpa-NG family for increased flexibility and rapid time to flight. Specifically tuned for GTO missions, it features high dV orbit raise and inclination change capabilities and can serve as a hosted payload platform.

Like Sherpa-FX and Sherpa-LTC, this Sherpa will be outfitted with a rideshare payload. To aid Orbit Fab in getting to their final destination, Sherpa-ES will perform a lunar flyby and return to Earth targeting the final GEO altitude and inclination. This shortens the time to orbit (only 15 days), and uses about 25% less propellant than traditional orbit raising.

“Offering rideshare missions to GEO is a real game changer for the smallsat industry,” said Meagan Crawford, co-founder and managing partner at SpaceFund, an investor in GeoJump, Orbit Fab, and 17 other space startups. “When we presented the idea of accessing GEO via rideshare with Spaceflight to our portfolio companies — as early as 2022, the response was overwhelming. What used to be part of a long-term strategy for many of these companies is now a short-term reality. We couldn’t be more excited to partner with Spaceflight to push the boundaries beyond LEO for the industry while building tremendous value for our portfolio companies today.”

Orbit Fab launched its first payload, Tanker-001 Tenzing, in June on Spaceflight’s SXRS-5 mission on SpaceX’s Transporter-2. It was the industry’s first operational fuel depot to provide propellant for the fast growing in-orbit servicing industry. Now, the company is expanding beyond LEO with this ride on the GEO Pathfinder mission.

Spaceflight’s Sherpa-LTE with electric propulsion successfully flew on the SpaceX Transporter-2 mission in June and Sherpa-LTC with chemical propulsion is scheduled to launch later this year on SpaceX’s Transporter-3 mission. Together, the propulsive vehicles enable unprecedented access for small satellites by allowing them to fly on a wider variety of launches at attractive price points, without requiring each spacecraft to have its own propulsion to reach their desired destinations.

Bonin adds, “We can now offer customers an order of magnitude more opportunities to springboard smallsats to orbital destinations never before possible. We’re already seeing tremendous demand for these ground-breaking missions and are excited to work with others who push the envelope of innovation beyond LEO.”