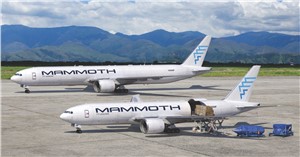 Mammoth Freighters LLC (Mammoth) announced today the launch of its Boeing 777-200LR and 777-300ER passenger-to-freighter conversion programs. Mammoth was founded in December 2020 by two highly experienced aviation industry executives, Bill Wagner and Bill Tarpley, both serving as the company’s Co-CEOs. The Company is backed by private investment funds managed by Fortress Investment Group LLC and its affiliates (Fortress). The combination of management expertise and strong financial support has enabled Mammoth to launch its Supplemental Type Certificate (STC) development program with the plan to achieve FAA approval in the second half of 2023.

Mammoth brings a flexible business model to market that provides air cargo operators and asset owners dynamic new options including the ability to provide their own assets for conversion or acquire or lease ready-to-fly converted freighters from Mammoth’s existing feedstock of ten 777-200LR GE90-110B1 equipped aircraft. These assets were acquired from Delta Air Lines and are the largest fleet of -200LR sister aircraft in the world.

The Company, which possesses a Boeing data license to execute 777 passenger-to-freighter conversions, has already made significant progress since it began operations in late 2020. Design and engineering for the 777-200LRMF program is well underway with tooling and parts already in fabrication. The conformity 777-200LR recently completed a comprehensive series of pre-modification flight tests and will commence modification in the second quarter of 2022. Upon certification of the 777-200LRMF, Mammoth expects approval of the 777-300ERMF STC to follow shortly afterwards.

Bill Tarpley, Mammoth Co-CEO, explained, “All models of the 777 with GE90-110/115 engines are renowned for having superior operating economics compared to the aging 747-400 and MD-11 fleets and, as freighters, both the 777-200LR and 777-300ER have a bright future in supporting global air cargo demand. With our modern design and existing feedstock of ten aircraft, Mammoth will provide express, e-commerce, and general freight operators with highly affordable, flexible, and purpose-built 777 freighters that burn less fuel and emit less carbon than the current freighter fleets.”

Bill Wagner, Mammoth Co-CEO, remarked, “We have assembled a distinguished team of over 100 design, engineering, certification, production, operational, and sales professionals with significant experience in converting Boeing passenger aircraft to freighters.” He continued, “We are truly excited to bring the high-capacity, long-haul Mammoth 777s to the marketplace to meet the current and future demands of this rapidly growing widebody air cargo sector.”

Mammoth, with offices in Escondido, CA and Orlando, FL, was founded specifically to develop, convert, and support both models of the most productive and economical 777 long range freighters in the world.