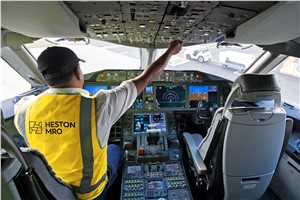 ‘This is great positive news for Heston MRO in the Covid-19 affected aviation world’, comments Asta Zirlyte, CEO of Heston MRO. ‘Despite the current travel restrictions, airlines in Australia and South East Asian region are gearing up for the post-pandemic market recovery. Heston MRO is positioning itself to play an active role in the upcoming market recovery. We are extremely honored with the trust that Singapore Airlines Group puts in Heston MRO as its long-standing technical support partner in Australia.’

With more than 25 years of operating history and airside presence in Sydney, Melbourne, Brisbane, Perth, Adelaide, and other airports in Australasia, Heston MRO is the largest independent MRO organisation in the region. Its Total Technical Care services are offered to airlines, leasing companies, and OEMs in the Australasian and South West Pacific region.

The SIA Group’s history dates back to 1947 with the maiden flight of Malayan Airways Limited. The airline was later renamed Malaysian Airways Limited and then Malaysia-Singapore Airlines (MSA). In 1972, MSA split into Singapore Airlines (SIA) and Malaysian Airline System. Initially operating a modest fleet of 10 aircraft to 22 cities in 18 countries, SIA has since grown to be a world-class international airline group. Singapore Airlines is committed to the constant enhancement of the three main pillars of its brand promise: Service Excellence, Product Leadership and Network Connectivity.