The Proton rocket launches on July 21 from Baikonur with direction towards the international space station, ISS. On board is the new robotic arm in which Terma has been deeply involved. 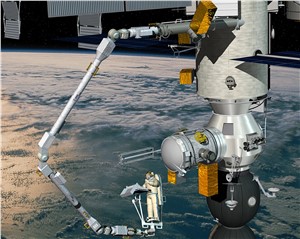 The people in the Space department at Terma follow anxiously when the Proton rocket launches on July 21 from Baikonur with direction towards the international space station, ISS. On board is the new robotic arm in which the Danish company has been deeply involved.

When the Russian Proton rocket sets its course on July 21 towards the international space station, ISS, it is, from a Danish perspective, with a very special cargo on board: a new robotic arm.

“Even though there has over time been many rocket launches, space travel will never become routine – even for us who have worked within this area for many years”, says Carsten Jørgensen, Senior Vice President and Director of the Terma Space division.

He and his colleagues have during the last 20 years been involved in design and development of the new robotic arm, also known as “European Robotic Arm” or ERA, which will now be send to the space station. Here it will be used to complete the space station and among other things handle some of the larger construction panels, replace spare parts, and inspect the surface of the space station.

“When expanding or repairing ISS, very advanced special equipment is used and, in this scenario, the new European robotic arm plays a key role. We have together with talented colleagues from many parts of Europe worked on creating a robotic arm, that functions in extreme environments, as on the space station, and that can handle vital tasks with high accuracy. Even though ERA is 11 meter long and can carry up to eight ton, it can install its cargo with a precision of 5 millimeter. Now we are excited to watch it in action,” explains Carsten Jørgensen.

The team at Terma has among other things had the responsibility of analysis, design, development, and validation of software for the control systems on board ERA. It is the first program that the European Space Agency, ESA, has had developed and classified as security critical. Therefore, high demands for reliability and security are required.

“The control software within ERA will monitor and control the automatic and manual tasks of the robotic arm – from replacement of payload to inspection and repair of the exterior surface of the space station. Therefore, precision and reliability are pivotal,” says Carsten Jørgensen.

Moreover, Terma has been involved in various support functions and will also be present during the launch in Baikonur on Wednesday.

Terma has participated in the development work together with the Dutch Airbus department and the joint European setup.

Tell a friend:
One of the Most Advanced and Critical Space Systems is Ready-for-launch